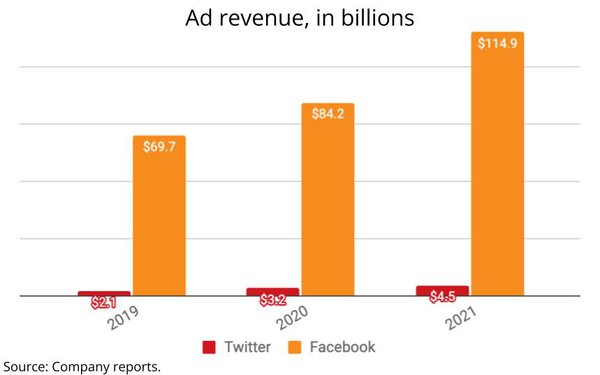 Following years in which a shift toward advertiser-friendly and community-safe policies coincided with a boom in ad spending on the platform, Madison Avenue is taking a wait-and-see view of Elon Musk’s $44 billion to take Twitter private.

From a macro point-of-view, the move is expected to have a negligible impact on the overall advertising marketplace, as Twitter still is a relatively small player that generates far more attention and discussion than it does advertising budgets, but it could impact some advertisers more than others, especially big ones.

“It’s not a big company,” notes Brian Wieser, global president of business intelligence at GroupM, adding, “It doesn’t make a huge difference in the grand scheme of things, but it makes more of an impact the more granular you get.”

Specifically, Wieser notes that big advertisers – the kind that are inherently sensitive to the kind of “brand safety” issues that Twitter did much to improve in recent years – “are disproportionately invested in Twitter.

“And for the largest advertisers on Twitter, it does mean something to them.”

In the end, Wieser says Twitter’s advertising prospects will depend on two big factors under Musk’s helm: How it operates as a privately-held company; and specifically, how Musk implements his publicly stated goals of expanding “free speech” on the platform, which he calls the world’s “public square.”

“Musk could come out and say, ‘We want this to be the friendly ad platform, regardless of what we say about free speech,” Wieser explains, adding: “Or you can imagine a scenario where Musk makes the platform a more toxic environment and larger brands would be dissuaded from advertising on the platform.”

The latter scenario raises big questions for a company that currently derives nearly 90% of its revenues from advertising (the rest comes from the sale and licensing of trend data), and will be saddled with billions of dollars of debt from, as yet, undisclosed creditors helping Musk to finance the buyout.

“If he makes it more toxic that generally will benefit the competition,” Wieser notes, pointing out that unlike the social media player most often compared to Twitter – Facebook – Twitter does not have the same degree of advertising revenue coming from the long tail of small and medium size businesses.

While Twitter remains a fraction of Facebook’s ad market share, it has been making gains since it began enforcing community standards to clean up much of the toxicity that big brands generally avoid having their ads run adjacent to.

As a result, Twitter’s ad revenue more than doubled over the past three years to $4.5 billion in 2021.

That’s less than 4% of Facebook’s advertising marketplace, which has continued to expand despite continuing concerns among large brands that it isn’t doing enough to enable a brand-safe environment.

“It's too soon to tell,” says Joe Barone, managing partner-brand safety for the Americas at GroupM, adding: “we don't know how Twitter Terms of Service might change, if at all, and what potential impact there might be on the ad environment.”

“I think free speech can coexist with the objectives we pursue for both consumer and brand safety in the social media space,” added another ad agency executive who asked not to be identified.

“I have not heard any reaction from clients or colleagues,” another anonymous senior agency executive said Monday after news of Musk’s acquisitions was announced.

The executive echoed GroupM’s Wieser’s sentiment about Facebook as an example, noting that “client animosity towards Facebook” persists, “for seemingly not taking full responsibility for what [it] monetizes.”

That sentiment “runs deep,” he notes, adding while it has not impacted Meta’s overall revenue growth, it has "in other ways like deliberately avoiding taking meetings with Facebook, while investing the time with other platforms. If Elon chooses to manage Twitter like ‘the public square,’ and not take responsibility for what the company does to make money,  I suspect Twitter will get less engagement from its advertisers. Sooner or later, that has to have some impact on revenue.”

To the extent that happens, GroupM’s Wieser said it could put a constraint on Musk’s public statements to invest in new product development and innovation to help grow Twitter with user and advertisers.

That’s where Twitter’s shift to a privately held company could create some opacity in terms of capital investments, but Wieser notes that even privately held companies have obligations like debt service to creditors that could put pressure on Musk’s growth plans if its biggest source of revenue – advertising – stalls among big advertisers.

“It doesn’t matter if you’re private or public, if you have a lot of debt, you’re going to be fairly constrained in terms of what you can do as a company,” he explains.

To that extent, Madison Avenue could actually emerge as more of a governing force for Twitter than it ever was able to achieve with Facebook, which could prove to be vital oversight for a company that will no longer have the public oversight of a board of directors and shareholders.

That said, Wieser notes it still will be accountable to laws and regulations.

“There’s still Section 230 and the Digital Services Act in Europe,” he notes.