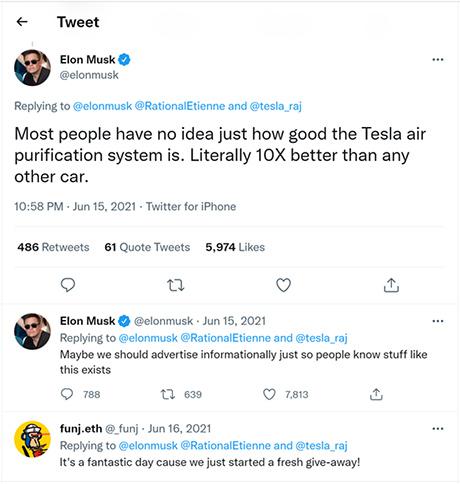 Tesla CEO Elon Musk -- who will now become the owner of Twitter and its $5 billion ad business -- doesn’t believe in paid advertising, at least according to many years of published reports.

He has avoided such practices since July 2003, when Tesla was founded.

In 2020, Tesla shareholders voted on whether the company would use paid advertising, but the move apparently lost favor.

Twitter announced on Monday that it had reached a deal to sell the social platform, along with its $5 billion advertising business, to Musk for $54.20 per share in cash, valuing the company at about $44 billion.

“The proposed transaction will deliver a substantial cash premium, and we believe it is the best path forward for Twitter's stockholders,” stated Bret Taylor, Twitter's independent board chair.

Analyst responses were varied. Investors of the investment firm Robert W. Baird asked analysts whether Musk’s takeover is based on “pure vanity or a legitimate attempt to fix the company’s ills.”

Colin Sebastian, Robert W. Baird analyst, thinks it will be a mix. “Musk is a frequent user of Twitter, and his reach undoubtedly has helped to cement his cult-like status among certain groups,” Sebastian wrote in a research note published Monday.

But how to “fix” Twitter without turning the site into a “bastion of crypto-hoarders and political extremists?” he wrote. Some of Musk's proposals such as implementing subscription services, and increasing verification checkmarks for all humans, because Twitter’s “verification process masks plenty of ‘legitimate’ voices” seems a bit more plausible then dumping advertising, he wrote.

Twitter -- which began as a social media site with a desire to link with Google search in hopes of attracting users -- last year launched Blue, its first consumer subscription offering. It rolled out in the United States November 2021.

“We think this is highly unlikely as the company would have trouble meeting debt covenants and/or interest payments,” Sebastian wrote.

Moderation policies also have been a form of contention for Musk, who also founded the space exploration company SpaceX.

Sebastian is skeptical as to how Musk will open-source the algorithms.

“We’d like to hear how Musk plans to do this without violating privacy or potentially allowing ‘bad actors’ to influence the ‘new algorithm(s),’” Sebastian wrote. “We view this as a nice to have, but hard to execute well, and risky if new algorithms hurt relevancy or personalization.”

“Brands are becoming more conscious of their adjacency to risky content or disinformation, so they may take their dollars to other channels with greater safety measures in place,” Proulx wrote in a note to Search & Performance Marketing Daily.

If Twitter becomes a Wild West platform with no moderation, and where disinformation can run even more rampant than it already does, brands might choose to invest their dollars elsewhere, Forrester Principal Analyst Kelsey Chickering wrote in an email.

“Brand safety and suitability are crucial evaluative measures when brands are determining where to invest their media dollars,” Chickering wrote. “Content moderation, especially as it relates to disinformation, is an issue that brands and agencies are pushing social platforms on.”

Brian Wieser, global president of business intelligence at ad agency GroupM, told the Wall Street Journal that “most advertisers who work with Twitter ‘strongly prefer content standards’ on the service.”

It all centers on free speech, according to Musk.

"Free speech is the bedrock of a functioning democracy, and Twitter is the digital town square where matters vital to the future of humanity are debated," Musk said in a statement. "I also want to make Twitter better than ever by enhancing the product with new features, making the algorithms open source to increase trust, defeating the spam bots, and authenticating all humans.”