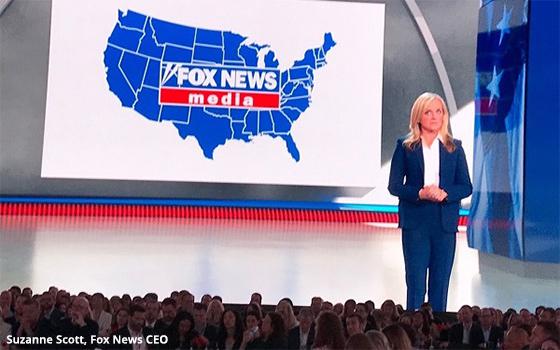 Addendum: Fox News Channel objected to TVBlog’s characterization that its prime-time stars – Tucker Carlson, Sean Hannity and Laura Ingraham – were omitted from Fox’s upfront presentation this week. A spokesperson noted they were shown on screen at one point during the presentation.

The names of Tucker Carlson, Sean Hannity and Laura Ingraham were conspicuously absent from the Fox News Media portion of the Fox Upfront in lower Manhattan Monday afternoon.

They are the prime-time stars of Fox News, but they were not mentioned anywhere in the presentation, nor were they pictured on any one of the four large screens that surrounded the Upfront’s audience in the event’s square-shaped venue.

Led by CEO Suzanne Scott (seen on video in the photo above), Fox News Media got an eight-minute time slot in the hour-and-a-quarter-long Upfront to present the attributes of its many platforms to the ad biz.

The Fox News Media segment included appearances by -- and mentions of, a number of Fox News personalities -- but no Tucker Carlson, Sean Hannity or Laura Ingraham, whose shows seen weeknights from 8 p.m. to 11 p.m. Eastern are the top audience draws for the news network.

Indeed, news anchor Bret Baier and weekday-morning talk-show host Harris Faulkner (“The Faulkner Focus”) seemed to be the ones positioned most as the faces of Fox News when they were paired in one of the portions of the Fox News Media presentation.

Like all of the presenters throughout the Fox Upfront, the two appeared on video projected onto the large screens.

Another presenter was Lawrence Jones (on video), who promoted the network’s late-night talk show “Gutfeld!” (seen weeknights at 11 Eastern and starring Greg Gutfeld, who did not appear) and the Jesse Watters show “Jesse Watters Primetime,” which recently took up residence at 7 p.m. weeknights on Fox News.

Watters did not appear at the Upfront, but Jones referred to the Watters show as a “prime-time staple” for Fox News.

Jones then introduced weekend morning-show co-host Pete Hegseth, who Jones referred to as “our very own Captain America.”

“Built on the values that connect us -- values like hard work, patriotism, love of country, and neighbors helping neighbors -- Fox News Media is committed to telling those stories every single day,” he said. And still, no mention of you-know-who.

Jones’ earlier remarks about Watters was one of only two times during the Fox News Upfront in which the phrase “prime time” was heard.

The other was during CEO Scott’s remarks when she said, “From the early morning to the critical prime-time hours, our shows continue to rate on a broadcast scale.”

At no point in her remarks was Fox News prime time linked specifically by name to Tucker Carlson, Sean Hannity and Laura Ingraham.

The Fox News Upfront pitch emphasized Fox News Media’s journalism, the reach of its multimedia platforms and the brand’s connection to a steadfast, loyal, engaged audience.

“At Fox News Media, the formula is simple. We don’t only reach the audience, we connect with them,” she said. “And this connection to our brand is one of a kind.”

So why were Carlson, Hannity and Ingraham omitted? It may be because the goal of the Fox News Media pitch was to emphasize journalism and entertainment over the partisan opinions of its three prime-time firebrands.

Plus, the three shows have proven to be a difficult sell -- at least according to numerous reports. To put it another way, the shows are adept at drawing audiences, but not mainstream advertisers.