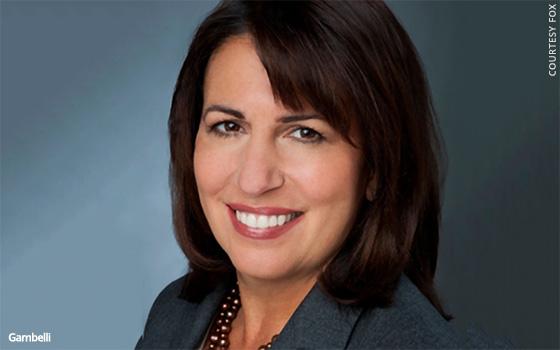 Amid a potential weak and uncertain upfront market, Marianne Gambelli, president of advertising sales for Fox Corp., said the Fox broadcast network has a different perspective -- one that could give Fox an edge.

“We have been living with so much uncertainty for the past two years, I think we are well prepared to enter a market with uncertainty in front of us,” she says, speaking at Fox's upfront prime-time press conference.

Gambelli says Fox is seeing strength in categories including technology, streaming programming platforms, financial services, and cryptocurrency marketers -- partly due to its younger-skewing audience and strong focus on sports programming.

A year ago, the Fox Television Network was estimated to have brought in around $1.55 billion in upfront advertising. Normally, 70% to 75% of a broadcast network’s advertising revenue is placed during the upfront marketplace, which begins in a few weeks.

At the same time, Gambelli says, Fox does not depend on mainstay upfront marketers such as consumer packaged goods categories -- which are currently down in the near-term scatter markets.

“Fortunately for Fox’s portfolio, we don’t really rely on those categories as much as our competitors do because we are younger. We have more much [programming] with our sports properties.”

According to industry estimates, around 60% of Fox's prime-time schedule, in terms of gross ratings points, is sports -- easily the highest among all broadcast networks. This is also boosted, Gambelli says, by its free ad-supported streaming service, Tubi, which brings in many younger viewers.

Overall, she says Fox’s prime-time size -- in terms of entertainment and sports programming mix -- works in its favor versus other major broadcast networks. “We are much smaller than our competitors. We don’t need the volume they need.”

Over the last two years -- through a recession, and a global pandemic -- Gambelli says Fox has been giving the marketplace what it has asked for: “We have worked through lots of flexibility [demands] and made it accessible to everyone as conditions keep changing.”

“Clients who spend through a recession come out on the other side in much better shape.”