Donaldjtrump.com Sees Surge In Traffic, Albeit For A Fundraising Site 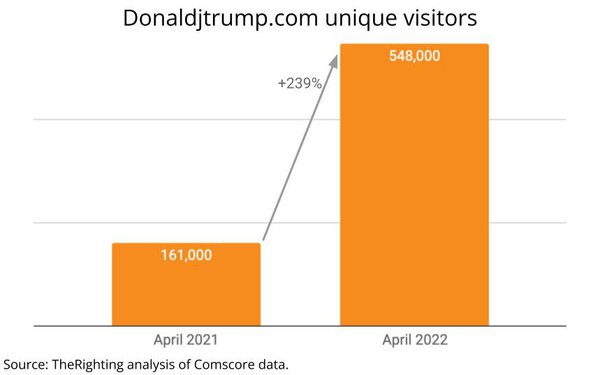 More than a year after the former president left office, his donaldjtrump.com website is experiencing a surge in visitors, albeit for a site that is mainly used to promote and raise funds, not explicitly publish content.

The site’s traffic jumped to 548,000 unique visitors in April -- an increase of 239% from April 2021, according to an analysis of Comscore data released this morning by political media tracker TheRighting.

While it was the second consecutive month of traffic gains for donaldjtrump.com, the site ranks relatively low compared with the politically oriented content publisher sites TheRighting normally tracks – big right-wing publishers such as Fox News, Epoch Times, Daily Wire, Washington Examiner, and Newsmax – which coincidentally have been trending downward in unique visitors (see table below).

“While the steep audience declines that Mr. Trump’s website has endured in the last year may have reached the bottom, his audience is still a fraction of what it was when he was in office,” says TheRighting President and Curator Howard Polskin. “The next few months will reveal whether the gains were the result of more daily posts – mainly endorsements of candidates he favored – or a barometer of some sort related to his popularity.

"It's a window into what he's reading since many times there are links to conservative websites," Polskin adds, noting, "It shows what forms his thinking."

TheRightng did not provide any analysis for the former president’s recently launched social media platform, Truth Social, but according to an analysis by Statista, it currency has about 2 million users who are mostly male, college-educated Millennials.

“Truth Social has been off to a fairly rocky start since its launch in February,” Statista Analyst Anna Fleck writes in the analysis, adding: “Characterized by glitches and long waiting lists of people unable to download it, the app has failed to garner as much of a fanbase as presumably hoped by its creators. GCS data found that while 25% of U.S. social media users were aware of the brand in 2022, only 3% of them had used the app in the past four weeks and only 2% were saying that they are likely to use the brand again.” 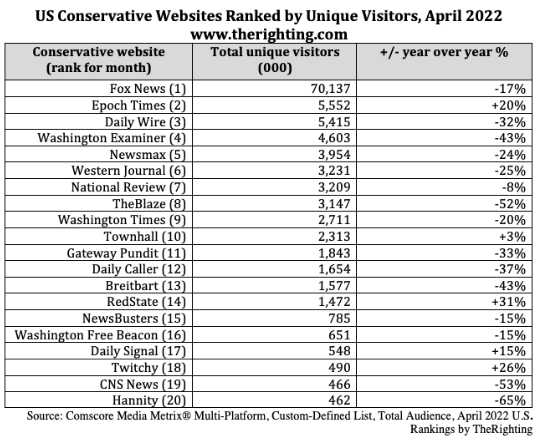