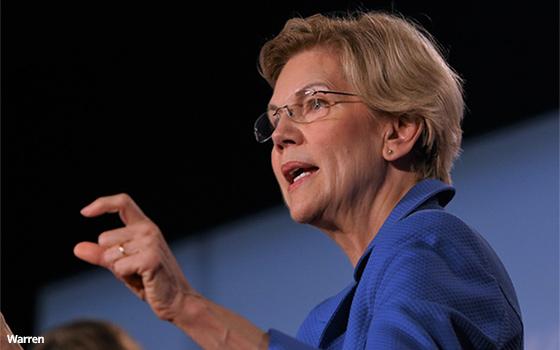 Vaccine critics including Robert F. Kennedy Jr. are appealing a federal judge's refusal to order Senator Elizabeth Warren to retract a critical letter to Amazon about the book The Truth About COVID-19, according to a notice filed Wednesday with a court in Seattle.

Kennedy and the others haven't yet filed any substantive arguments with the appellate court.

Their dispute with Warren dates to last September, when the Massachusetts Democrat said in a letter to Amazon chief Andy Jassy that Amazon was contributing to false claims about the COVID virus by algorithmically promoting the book.

Warren wrote that the top search result on Amazon for the terms “COVID-19” and “vaccine” was The Truth About COVID-19: Exposing the Great Reset, Lockdowns, Vaccine Passports, and the New Normal, which she said “perpetuates dangerous conspiracies about COVID-19 and false and misleading information about vaccines.”

She urged Jassy to review Amazon's algorithms, report on whether they recommended books with incorrect information about COVID-19 and, if so, develop a plan to modify them.

Book authors Robert Mercola and Ronnie Cummins, along with Kennedy (who wrote a forward to the book), and Chelsea Green Publishing (which published the book), sued Warren, alleging that she attempted to suppress the book.

in violation of the First Amendment. Kennedy and the others sought monetary damages and an injunction requiring Warren to withdraw her letter.

U.S. District Court Judge Barbara Rothstein in Seattle rejected the request for an injunction, writing that Kennedy and the others aren't likely to prove that Amazon or other booksellers “reasonably perceived” Warren's letter as a threat.

“The threat of legal sanctions can act as an unlawful restriction on speech, but a threat will only be perceived as such if there is a realistic chance the threatened action can be carried out,” Rothstein wrote last month.