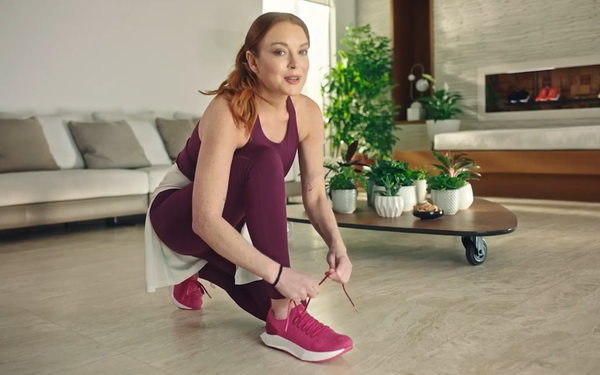 In one of the most unexpected endorsements of late, Lindsay Lohan stars in an ad for New Zealand shoe brand Allbirds.

The shoes by Allbirds are made with natural materials, not plastics.

The ad features Lohan under the heading of “The Unexpected Athlete.” The ad opens with an empty, unmade bed, and then we see a chipper Lohan getting ready for a run as she explains her situation.

“When Allbirds announced I was the spokesman for their new running shoe, the Internet was, well…” Lohan then reveals the look of a shocked commenter on her phone.

She further explains that she didn’t run track in high school and Allbirds’ choice was unexpected.

Lohan even does a callback to her 2004 hit comedy "Mean Girls" with the line “Well, it is Wednesday,” uttered by Amanda Seyfried in the film.

An Allbirds rep said there was no ad agency behind the campaign, but Allbirds Global Director of Campaigns & Storytelling Lee Price developed the concept and creative.

The effort comes as the 35-year-old former child star is attempting a comeback of sorts. She recently inked a two-picture deal with Netflix and will star in a Christmas movie for the streamer.

Lohan also recently appeared as a judge in a season of the Australian edition of "The Masked Singer."