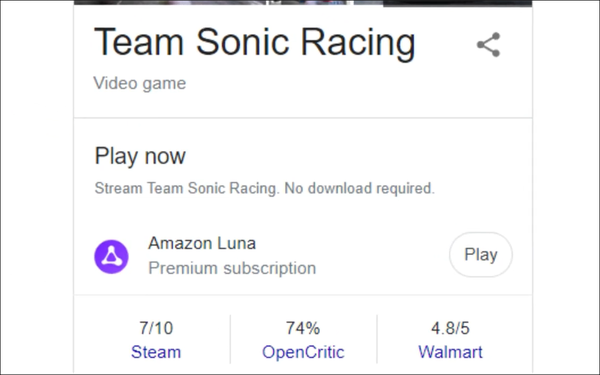 Google executives have been looking to integrate the ability to search for a video game and launch it in the web browser for a few years. That is now a reality with a feature in the company’s Stadia streaming service for gaming now available.

Chappel found the feature by searching for Team Sonic Racing. Google lets players launch the game via Amazon Luna from the “Play now” button. it appears the feature is only available in the U.S.

The limited launch of a Google "Play now" button appears in searches for select video games on desktop browsers. The tab can be found in the right-hand "knowledge panel." It typically has user reviews, game details, and digital download purchase links.

“Then we searched for Control Ultimate Edition and, sure enough, the description popped up along with the option to launch the game,” he said, adding that through Stadia, the gamer can play the game via the cloud.

He also searched for Halo Infinite in Google Search and found and found a Play now button. This button doesn’t launch the game completely. Instead, brings players to the Xbox homepage, where players can launch the game from there.

While Stadia allows gamers to play the game in the browser, it also requires gamers playing on other platforms to go to each individual service to play.

“[It] has huge implications on the future of cloud gaming and video games in general, he said. “Previously, the process to discover a new game was, well, you discovered a game on Google, turn on your console or PC, access that platform store, buy a game, wait for it to install, and then you get to finally play it.”