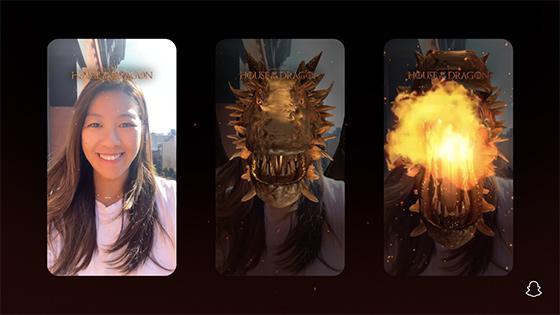 To coincide with the highly anticipated Game of Thrones prequel -- the HBO Original Series House of the Dragon -- Snap Inc. and HBO Max are bringing dragons from the show to cities around the world via location-based augmented reality (AR) experiences.

Alongside the show’s premiere this coming Sunday, HBO Max will release a new selfie and world-facing AR Lens that transforms Snapchatters into a fire-breathing dragon.

Snap says this is the first partnership to pair a brand with a diverse group of Lens Creators at a global scale.

Landmarker Lenses, which have been used over the past several years in a variety of ways, will continue Snap’s vision of taking over buildings with Game of Thrones dragons, first seen in 2019 during the show’s final season premiere when an ice dragon flew along the Flatiron building in New York.

Each Lens creator personally selected the location for their individual Landmarker Lens.

Snap says the global campaign will continue to evolve over the course of the season, totaling around 20 additional Landmarker Lenses from creators in over 10 more countries.