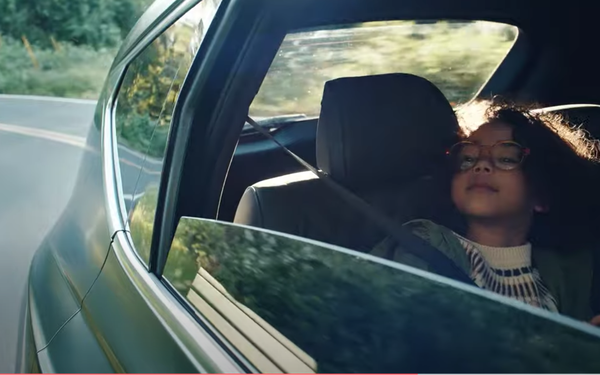 Genesis Motor America has launched a campaign for the GV80 SUV that includes a TV spot that pulls at the heartstrings.

The spot opens on a father on a business call while his young daughter plays with a toy boat, “sailing” it across a blue blanket. “Dad, how big is the ocean?” she quietly asks, prompting him to pause before ending the call. “Let me call you back,” he says before the scene shifts to them getting into their vehicle in front of their midcentury modern ranch.

The mini-road trip includes a drive out of the city before a stop to check out the trees in the forest before ending up at the ocean right before sunset.

Just before it comes into view, he asks her “You ready?”  They stop the car and get out and she runs to the water’s edge while squealing with delight. They stand looking out into the vastness of it in a beautiful end shot.

The spot ends with copy superimposed on the screen: “Life is defined by the choices we make. Define yours. The Genesis GV80.”

“Ocean” will appear in digital platforms and on broadcast television throughout the fall, focused on building awareness for the brand, which is the luxury division of Hyundai Motor Corp.

The campaign, from AOR Innocean, includes an accompanying social campaign.

GV80 is one of the company’s best-selling vehicles and SUVs are key drivers of awareness for any luxury brand, says Wendy Orthman, Genesis executive director, marketing.

The spot gives the automaker the opportunity to reintroduce Genesis and its award-winning midsize SUV to a new audience, she adds.

“Over the past two years many have struggled with balancing work, family and fighting to prioritize what matters most,” Orthman says. “Particularly when raising kids, it is the actions we take, the choices we make that speak the loudest.”

It is that truth that drove the creative concept in “Ocean,” she says.

“Choosing to drive a Genesis is a defining choice in the crowded world of luxury mobility,” Orthman says. “But putting down the phone and choosing time with your people are the choices that matter most.”

The campaign joins others currently on air for the brand’s first electric vehicle, the GV60, as well as the G90 sedan, which went on sale last week.