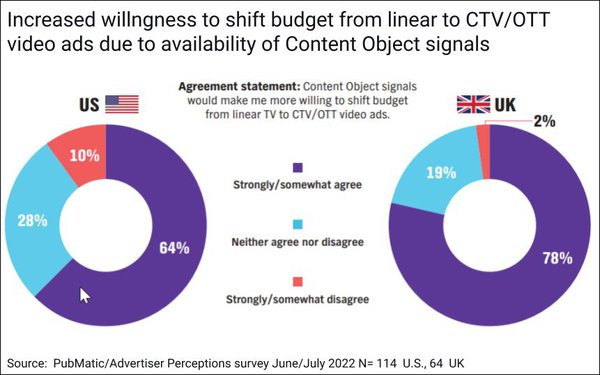 That’s according to a new survey of 200 U.S. advertisers and 100 UK advertisers fielded in June and July by Advertiser Perceptions for supply-side platform (SSP) PubMatic (which is among the programmatic platforms that offers Content Object signals as part of inventory buys).

Brand and agency buyers alike indicated that they are in the process of shifting more of their CTV spend to programmatic buys purchased via DSPs because of the ability to employ richer audience-based and content-related signals to target CTV and OTT video ad buys and get impression-by-impression reporting, rather than the aggregated reporting typical of direct insertion order (I/O) publisher buys. 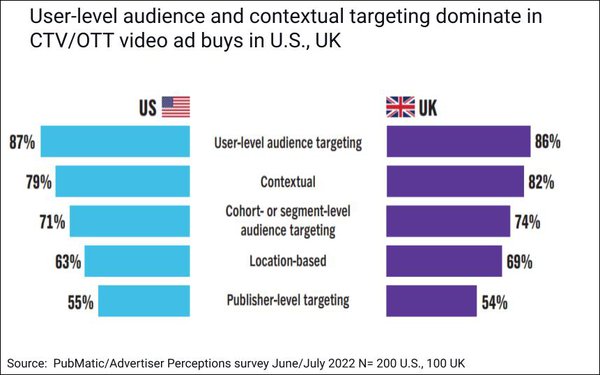 Among the tools enabled by CTV programmatic contextual targeting is the Content Object in the OpenRTB specification, which includes parameters that describe the content impressions within — in other words, the type of content an ad will appear near.

For instance, buyers can structure their bids to learn more about the impressions available by including requests for information describing the content category (e.g. video), genre (e.g. mystery), rating (e.g.TV-13) and more.

The study found that more than half of advertisers in the U.S. and UK are at least somewhat familiar with Content Object signals, with familiarity strongest in the UK.

Among those familiar with the signals, half in the U.S. and six in 10 in the UK said they are currently using these to purchase CTV/OTT video ad inventory and use for decisions about their supply. 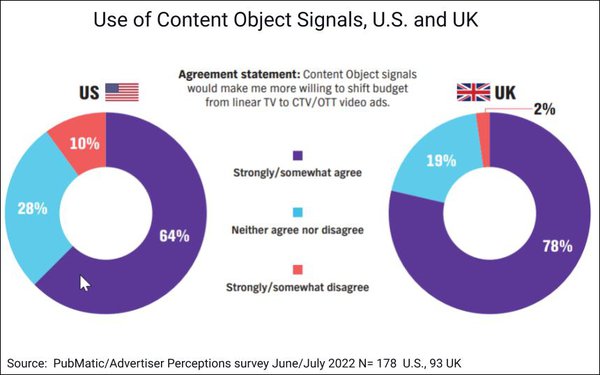 Seven in 10 U.S. advertisers, and even more UK advertisers, agreed that Content Object signals are useful for transparency, including the ability to use the context of delivered impressions for attribution and optimization.

Nearly two-thirds (62%) of U.S. advertisers and 82% of UK advertisers agreed that they would increase their spend with partners that provide data such as Content Object signals.

Two-thirds of U.S. advertisers and 78% of UK advertisers said the presence of Content Object signals would make them more willing to shift budget from linear TV to CTV/OTT video ads (chart at top of page).

In addition, 57% of U.S. and 64% of UK advertisers indicated willingness to pay a premium for the transparency that Content Object signals can provide. 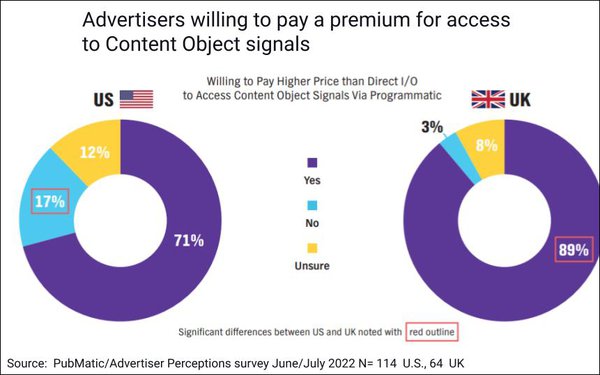 “The more data that you have and the more information you make available through Content Object signals, for example, the more likely I am to invest in your products, because I assume there’s additional value there as well from an insights perspective that I can report back to the business,” said a brand-side UK advertiser who also has experience on the agency side, according to the PubMatic report.