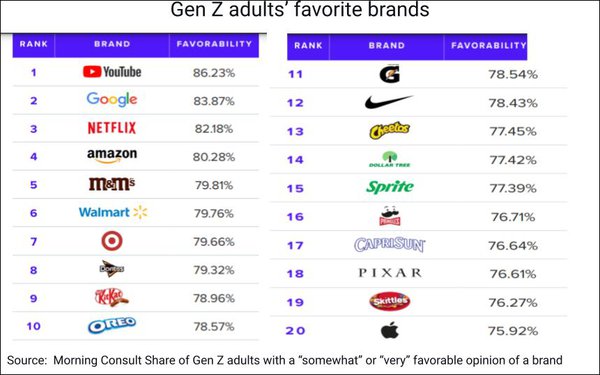 Four out of Gen Z adults’ top five favorites (percentage who view a brand “somewhat” or “very” favorably) are tech brands: YouTube, Google, Netflix and Amazon, according to the report, based on survey data gathered between May 1 and August 1 2022.

M&M’s is in fifith place, followed by Walmart, Target, Doritos, KitKat and Oreo (chart above).

Food and beverage brands make up half of Gen Z’s top 40.

Chinese fast-fashion brand Shein is the standout apparel brand--viewed favorably by 44% of Gen Z adults, compared with 22% of all adults — a larger gap than any other apparel brand. Shein is now the ninth most popular apparel brand among Gen Z women, in about the same range as classic American brands like Levi’s and Calvin Klein.

The brands that are significantly more liked by Gen Z adults as compared with U.S. adults as a whole — dubbed “standout” brands — include TikTok, Discord, Snapchat, Instagram, Cash App and Twitch.

Six of the top 20 Gen Z standouts are gaming brands or brands that are heavily involved in the gaming industry, including Discord and Twitch. 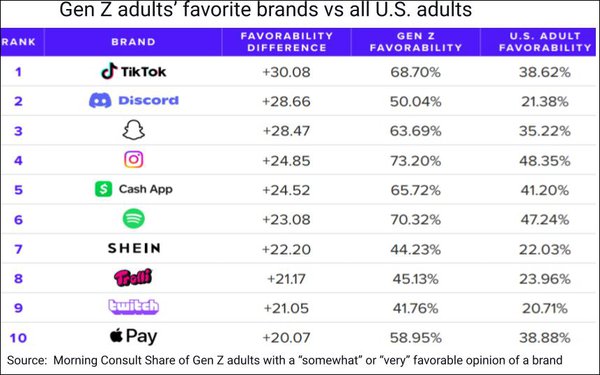 Gen Z is harder to please overall. Across the 4,000 brands tracked through daily surveys by Morning Consult’s Brand Intelligence in the U.S., Gen Z’s average favorability rating is just 27%, compared with 33% for all adults and 36% for millennials.

Gen Z also has higher unfavorability results: On average, 10% of Gen Z adults have an unfavorable impression of a given brand, compared with 8% for all adults and 9% for millennials.

Although Gen Z is often lumped together with millennials, their tastes diverge on some key brands.

Five brands earned double-digit leads in favorability with Gen Z adults when compared with millennials: Discord, TikTok, Crocs, Snapchat and Shein. Discord led the pack with an 18 percentage-point gap in favorability between Gen Zers and millennials. 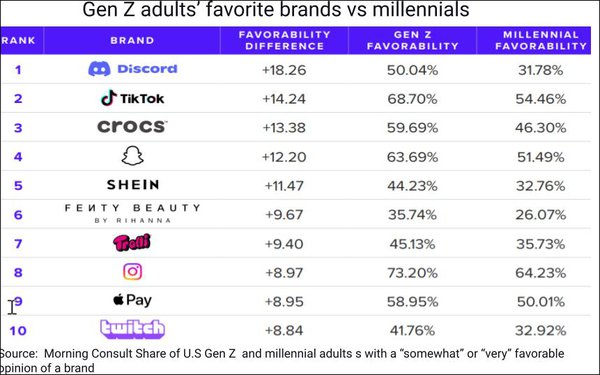 Among the additional insights:

Adidas is the only apparel brand in Gen Z’s top 40, ranked 26th. However, in the standouts comparison, Chinese fast-fashion brand Shein is the leader — viewed favorably by 44% of Gen Z adults, compared with 22% of all adults — a larger gap than any other apparel brand. Shein is now the ninth most popular apparel brand among Gen Z women, in about the same range as classic American brands like Levi’s and Calvin Klein.

Brand Intelligence’s survey sample sizes vary by brand, with an average representative sample of 16,053 U.S. adults per brand, including an average of 2,031 Gen Z adults (those born between 1997 and 2004). The overall rankings were determined by measuring the share of Gen Z adults who rated their opinion of each brand as either “very” or “somewhat” favorable. The standout rankings were determined by taking the difference in favorability between the highlighted population and the benchmark population.