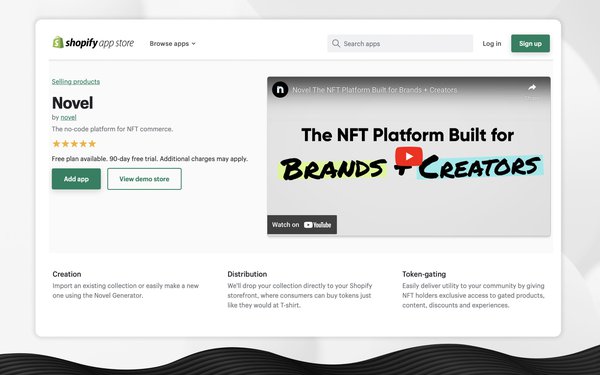 In a move to make Web3 accessible and approachable for all merchants, Shopify has announced a new partnership with no-code Web3 commerce platform Novel, via a new app in the Shopify app store where NFTs, digital services, and physical goods can be bought and sold.

Novel’s Shopify app will layer Web3 commerce onto the established ecommerce platform in order to equip merchants with the ability to utilize Web3 “without prior technical knowledge, upfront financial or time commitment,” according to a recent statement.

Novel, founded in 2021, will be the first all-in-one Web3 tool on Shopify. It will invite users to create NFTs and drop collections while handling the required programming and blockchain management responsibilities.

Novel will also automatically deploy the smart contract for the NFT and drop it on the user’s Shopify storefront on behalf of the merchant, allowing users to control the list date, drop date and reveal date as a way to drive traffic and community around the new collection.

The company -- which is looking to make Web3 commerce as easy as traditional shopping -- says this experience will happen with the same simplicity as adding a new t-shirt to an existing Shopify storefront.

“Token-gating” -- when merchants provide exclusive content to those who buy their digital tokens, similar to a subscription-based model in Web2 -- will also be available to merchants who want to add token-based utility to their Shopify storefronts.

Novel says these may take the form of “token-gated products, URLs and discounts, cross-chain gating on Solana, Ethereum and Polygon, ERC-20 gating and a Shopify tags integration which authenticates token ownership for use in other apps.”

As the crypto market continues to struggle, major companies are attempting to bring Web3 into the mainstream.

On Monday, Mastercard announced a partnership with crypto trading platform Paxos to enable banks to offer seamless and secure crypto trading capabilities and services to their customers.

And last week, LG announced a partnership with Web3 platform Fr0ntierX to launch interactive smart-screen NFT integrations and experiences, striving, they said, for the “mass adoption” of Web3 by brands.