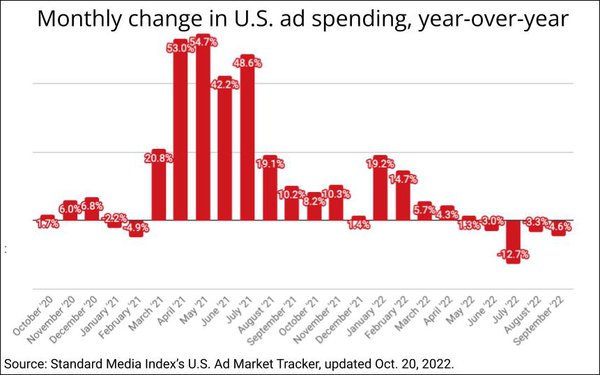 The U.S. advertising marketplace fell 4.6% in September vs. the same month a year ago, marking the fourth consecutive monthly decline, and suggesting the beginning of a new U.S. ad recession.

While the June-September 2022 declines compare with healthy gains for the same months a year ago, the 2021 boom was also the beginning of downward trend (see chart above).

The new monthly data comes as major agency holding company forecast units have been reaffirming double-digit growth expectations for calendar year 2022 and mid-single-digit gains for 2023, at least at this point.

The consensus outlook for 2023 currently stands at an expansion of 4.5% in U.S. ad spending.

One of the reasons the forecasters have remained so bullish despite increasing macroeconomic uncertainty is that they believe the ad economy has become increasingly disconnected from the general economy, partly because of the emergence of new categories of ad spending from small- and medium-size businesses, especially startups and D2C brands utilizing big digital platforms to drive their business.

In fact, the U.S. Ad Market Index is derived from actual media spending by the major agency holding companies, so may not be as representative of the total U.S. ad market that the forecasters look at, often utilizing "bottoms-up" calculations based on revenues reported by media companies, vs. the spending processed by big agencies.

The index, however, does show a constant progression of big agency budgets shifting from legacy media to digital. For the September, for example, digital's share of currently stands at 59% of their ad spending, up three points from 56% in September 2021, and up 11 points from 48% in September 2020.

That said, September index data also shows another potentially alarming trend, which is that ad spending by smaller advertisers is now falling at near the same rate as the biggest ones. According to MediaPost's analysis of the data, the top 10 ad categories fell 4.9% in September, while all other categories dropped 4.4%. That's the closest parity of ad spending change between the top 10 and all others since March 2021.