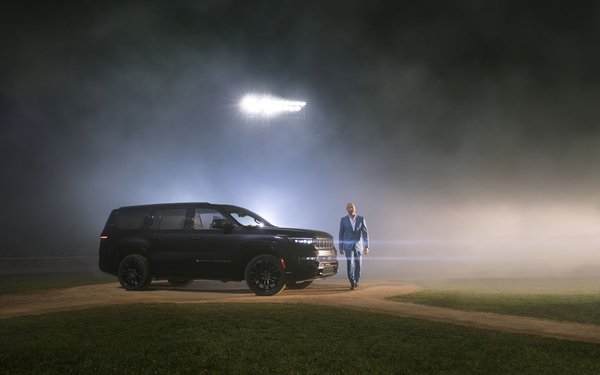 “We needed a personality that symbolizes American success and American aspiration,” he says. “We wanted to have someone relatable to our customer, someone that they would know, someone relevant to them, someone with a family … the kind of person who authentically could embody our three-row SUV.”

“We wanted someone who's not necessarily a rockstar, a Hollywood star -- you know, not someone over commercialized,” he says, adding that Jeter also has Midwestern roots, having been raised in Kalamazoo, Michigan about two hours from where the Grand Wagoneer is manufactured in Warren, Michigan.

The debut spot shows the Jeter and his wife Hannah in various location in New York City and upstate New York. The Jeter children in the spot are portrayed by actors. The couple does not speak in this spot, but might in future creative, Francois says.

“Ever wonder why they call it the American Dream…and not the American goal? Or the American plan?” begins the voiceover. "Maybe it’s because in dreams, you can do anything. You can be reborn in the motor city…and rise up in the city that never sleeps."

Both Derek and Hannah Jeter, who is a fashion model and television host, will promote the Grand Wagoneer on their personal social channels, says Nicole Pesale, head of Jeep advertising in the United States.

The automaker doesn’t view them as influencers or celebrity endorsers, she says.

“We really look at them more as partners,” Pesale tells Marketing Daily. “It's been a great communication with them all the way along of: ‘Are there shared values? How can we work together?’ and less of ‘We're paying them to be part of the campaign.’ So it's been a wonderful partnership so far, and that's how we see it moving forward.”

Francois declined to reveal what the automaker is paying the Jeter family for their participation.

Texas and New York are both huge markets for the Jeep Grand Wagoneer, says Jim Morrison, head of Jeep brand North America.  So breaking the campaign during the World Series, which includes the Houston Astros, is serendipitous, he says. Although he retired from the Yankees as a player in 2014, Jeter remains popular in New York, he adds.