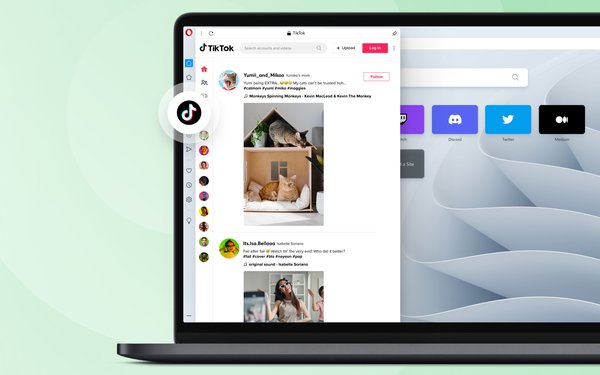 Web browser developer Opera announced Tuesday the addition of a TikTok feature to the sidebar of its desktop browser. It allows users to scroll through TikTok videos and post content without opening a separate app or creating a new tab.

The TikTok features adds to an existing lineup in the browser that includes Instagram, WhatsApp, and Twitter.

Enabling the TikTok feature means clicking the three dots at the bottom of the Opera sidebar and enabling it in the Messengers section of the Sidebar. When enabled, users can open the sidebar and scroll through their TikTok feed before returning to what they were doing prior.

Opera desktop browser users also can upload content to TikTok directly from the browser, allowing them to edit on a larger screen before uploading their videos.

The exposure TikTok will gain in the Opera browser could help the media plaform gain advertisers. TikTok did cut its revenue targets by $2 billion for 2022, the Financial Times reports. The company’s CEO projected $10 billion in revenue instead of $12 billion to $14 billion at a company meeting in September.

Employees in the meeting, according to reports, were told they did not drive enough sales in the areas of advertising and ecommerce.

Last week, TikTok Shop has debuted in the United States to give sellers a place to reach consumers, and consumers a place to make purchases through ecommerce. The feature previously was only available in the UK and several countries in Southeast Asia.

The move now allows users to make purchases directly through the app using the feature. TikTok, which is owned by the Chinese social media giant ByteDance, told other international merchants they will eventually be allowed to start using TikTok Shop.