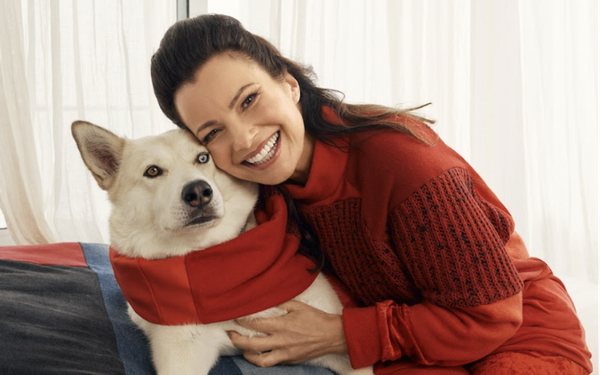 The announcement comes just as the company posts sales results that defy expectations.

The actress-comedian may be best known for her distinctive nasal voice and starring role in "The Nanny," but fans love her quirky style, too. So ThredUp paired her with Zero Waste Daniel, a Brooklyn-based designer that has produced more than 1,000 one-of-a-kind items, including apparel, accessories, and home goods.

The looks are inspired by Drescher's style and bring the company's trademark trash-to-treasure aesthetic to life in new ways -- from $12 scrunchies to $600 coats.

ThredUp will donate 20% of all proceeds to Cancer Schmancer, Drescher's charity.

"Nowadays, it feels like sustainable is a word people slap on something to make it more expensive," says Zero Waste Daniel in the company's announcement.

"It's always a challenge to get price point and ethics to align, but with the magic of the holiday season and the endless inspiration that is Fran, we managed to upcycle literally thousands of garments, make everything here in New York City, pay our workers fairly, and still have giftable items coming in as low as $10."

Separately, the Oakland, California-based reseller says its third-quarter revenues advanced 7% to $67.9 million, beating investor expectations. ThredUp says it is fending off challenges from the growing number of apparel companies moving into resale, from Target to Lululemon to Nordstrom.

"Even as the retail landscape becomes increasingly competitive and our customer is faced with economic uncertainty, we remain confident in our ability to flex our marketplace model and make progress towards profitability," said James Reinhart, co-founder and chief executive officer, in its announcement.

But losses increased, growing to $23.7 million, compared to a loss of $14.7 million in the year-ago quarter.

The number of active buyers on the platform climbed to 1.7 million, up 18%.

ThredUp says the growth of its "Resale-as-a-Service" program continues, adding Hot Topic and Francesca's as new partners. And it's expanding its relationship with Athleta and Vera Bradley.