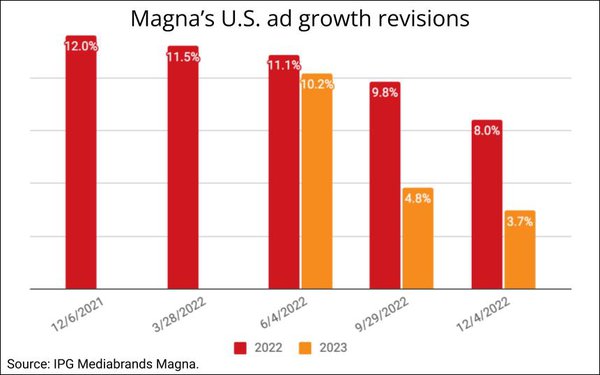 The U.S. ad economy is now projected to expand only 9.9% this year, according to MediaPost's consensus estimates based on the compilation of data issued by the Big 4 agency holding company -- Dentsu, GroupM, Magna and Zenith -- forecasting units.

The revision is based on year-end updates released by WPP's GroupM unit this morning and IPG Mediabrands' Magna unit on Sunday, and represents a nearly two-percentage-point downgrade from the last update in September.

MediaPost's consensus forecast tracking is based on simple averaging for total U.S. ad-growth estimates issued by each of the holding company units throughout the year, and while they utilize different bases and factors in their estimates, the goal is to provide a broader consensus view of U.S. and global ad-spending trends over time.

While Publicis' Zenith unit will also release its revised global estimates this morning, it will not issue an update for U.S. ad spending.

Magna revised its U.S. ad forecasts down to 8.0% for 2022 from the 9.8% expansion it was forecasting in its last update in September.

Magna originally benchmarked 2022 U.S. ad growth at 12.0% when it released its initial forecast in December 2021 at last year's UBS conference, and it has trended down periodically ever since (see chart above).

While the U.S. ad-market growth has been gradually decelerating through the year, Magna analysts interestingly forecast that it will begin to "reaccelerate" through 2023, despite some pundits' forecasts for a macroeconomic slowdown, as well as comparisons with important cyclical ad-spending events in 2022, including the midterm elections, Olympics and World Cup. 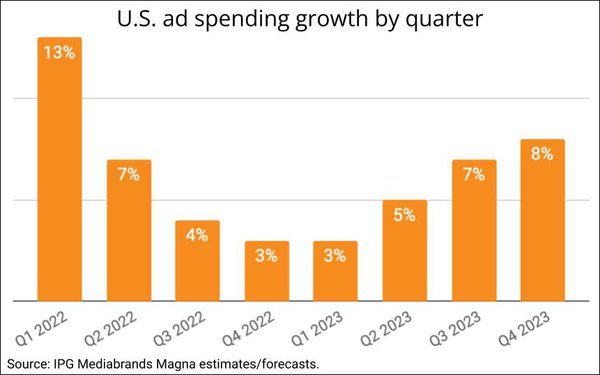 In terms of global ad spending revisions, Magna now projects worldwide ad spending will expand only 6.6% this year -- down 2.6 percentage points from the 9.2% it was estimating at its midyear update in June.

Magna also revised its 2023 global ad-growth estimate down to 4.8% from the 6.3% expansion it was projecting in June.

The downward revision is consistent with the Big 4 trending throughout the year, and is expected to be reflected in GroupM's and Zenith's presentations on Monday, reflecting increasing U.S. and global economic angst.

As part of its analysis, Magna attributed the global ad-growth slowdown to a variety of economic and geopolitical factors, as well as some things endemic to the ad-supported media marketplace.

Of particular note, Magna attributed much of the media marketplace slowdown to digital media, which in recent history has been the major catalyst for growth.

Due mainly to the deceleration of ad spending on social media platforms, Magna estimates the growth gap between digital and traditional media will be the narrowest in recent years (see this week's RTBlog for more analysis on that). 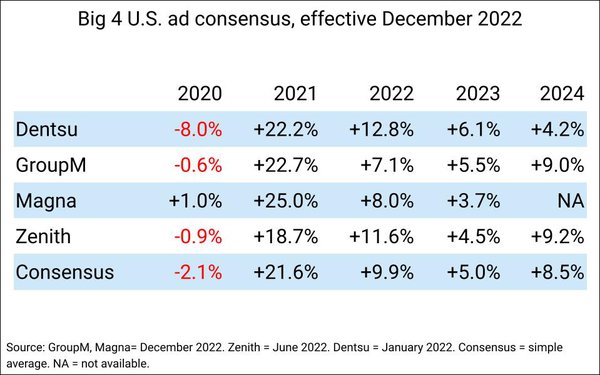 Editor's note: This story was updated from an earlier version based on GroupM's release of its data this morning.