Disney+/Netflix To Add $1.2B To CTV Ad Spending Next Year, Linear Poised To Fall Below 50% 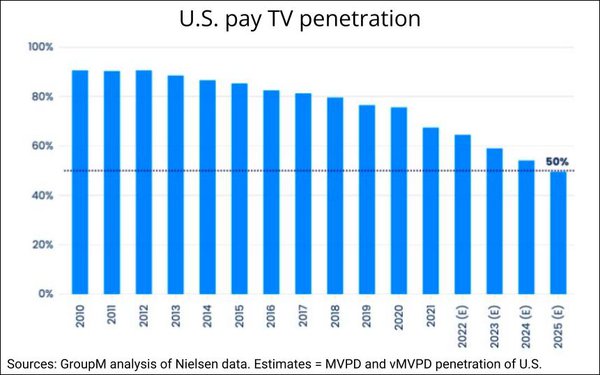 If there was any doubt that the TV advertising marketplace is poised to shift to one dominated by CTV, the major agency forecasters laid it to rest this week.

Among the sidebars in GroupM’s update was a prediction that so-called “linear” TV options – broadcast channels and cable networks available via MVPDs and even vMVPDs – will become a minority of the way Americans watch “television” within three years.

“We estimate that pay TV penetration, including multichannel video programming distributors (MVPDs) and virtual MVPDs (vMVPDs) will fall below 50% of U.S. TV households in 2025,” GroupM Global Director of Business Intelligence Kate Scott-Dawkins writes in the agency’s just-released “This Year Next Year” year-end forecast.

And while she did not explicitly address the impact on ad spending, she notes that “by 2025 all pay TV providers combined will reach fewer than half the homes in the U.S.”

“The launch of the ad-supported tier of Netflix and Disney+ shows the value of ad-supported media, especially in an uncertain economic environment,” Magna’s Luke Stillman says, adding, “This launch will ad more than a billion dollars of global revenue in 2023 and that new money will drive connected TV growth of nearly.”

Magna’s official estimate is the ad-supported options by those two services will add $1.2 billion in spending to the 2023 marketplace, driving connected TV ad growth up 29%.