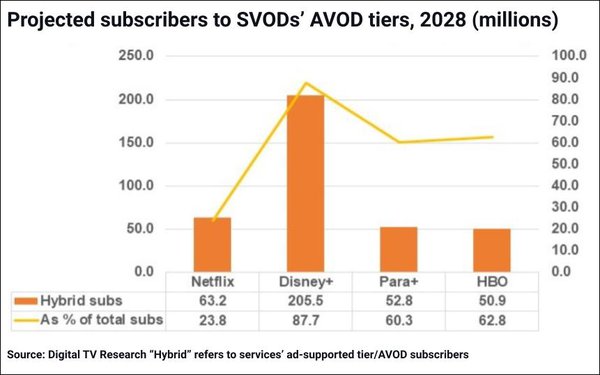 DTVR (which refers to the cheaper AVOD tiers as “hybrid” AVOD-SVOD tiers), projects that globally, subscriptions to both types of tiers will increase by 428 million between 2022 and 2028, to reach 1.76 billion.

Netflix, Disney+, Paramount+ and HBO/HBO+ alone are collectively projected to reach 372 million total global subscriptions, with their AVOD tiers accounting for 56% of those, DTVR estimates.

That assumes that by 2028, Netflix will offer its AVOD tier in 85 countries, Disney+ in 91 countries, HBO in 55 and Paramount+ in 56. Those will include pan-regional services in Spanish-speaking Latin America and also in the Arabic-speaking countries.

Given that Disney+ SVOD subscribers in most markets are expected to convert “automatically” to AVOD, the platform (set to launch in the U.S. on December 8) will have 206 million subs in that tier by 2028 – or 88% of its total, the analysis concludes.

For HBO/HBO Max and Paramount+, AVOD tiers are projected to account for 62.6% and 60.3% of total global subs.

In contrast, just 24% (still a huge 63 million) of Netflix’s total projected subscribers are expected to be on the AVOD tier as of 2028.

Netflix has a large base of SVOD-only subscribers, and most of those subscribers will remain on these plans, despite the AVOD’s option being considerably cheaper, predicts Simon Murray, principal analyst at DTVR.

Netflix’s AVOD tier “will appeal most to developing countries where disposable incomes are lower,” and “will also be attractive to new subscribers that do not have legacy SVOD-only subscriptions,” Murray says.