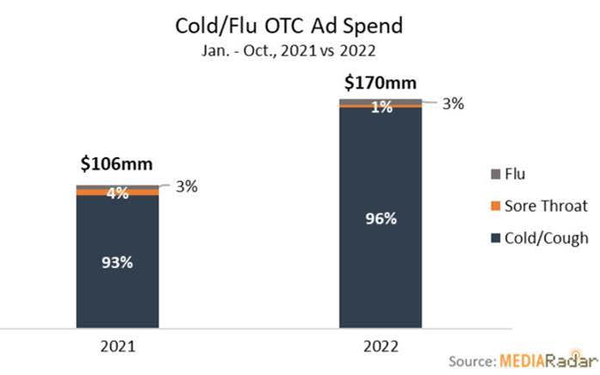 According to the CDC, we are currently experiencing the worst flu season in over a decade. With this in mind, a new report from advertising intelligence company MediaRadar finds that various over-the-counter (OTC) drug brands are increasing their ad spend to connect with consumers.

Data from the report shows that OTC advertisers for cold and cough medicines ramped up investments in September and October by over 1000%. In total, spend exceeded $73 million during that period, with spend in October jumping up 30% to $41 million.

“Smart OTC cold and cough brands are investing to stand out in a historic flu season,” says Todd Krizelman, CEO at MediaRadar. “The OTC market is often seen as a commoditized category, where consumers make purchase decisions based on price alone. There is also increasing pressure from retailer private labels, who continue to win market share.”

By investing in advertising, Krizelman adds, savvy OTC advertisers are cutting through the clutter and differentiating their brand, and are ultimately better positioned to connect with consumers.

The report lists Reckitt Benckiser’s Mucinex as one of the top OTC cold and cough spenders, increasing ad spend by 68% year-over-year and 95% month-over-month in October, with over one-third (35%) of the total spend captured by the flu-heavy months of September and October.

In addition, Mucinex is investing in a variety of unique channels to stand out, including 32% of spend going to digital media including OTT, social formats and display.

To differentiate itself and connect with consumers, Mucinex is also investing in in-store retail media like Cooler Screens, a platform that has turned grocery store cooler aisle refrigerator doors into Internet-enabled devices with ads.

Cooler Screens is currently working on five large campaigns for cold and cough brands and has seen 10 times the ad spend in the flu and cold category this season compared with 2021.

Year-over-year, flu season ad investments from October for OTC cold and cough advertisers have increased to $41 million compared to $25 million in 2021––a rise of 62%. The category’s top spenders include Bayer, P&G and Reckitt Benckiser.

MediaRadar also found that OTC advertisers for cold and flu symptoms spent nearly $170 million combined through October 2022. This represents a 60% year-over-year increase and expansion from the $106 million invested during the same time in 2021.