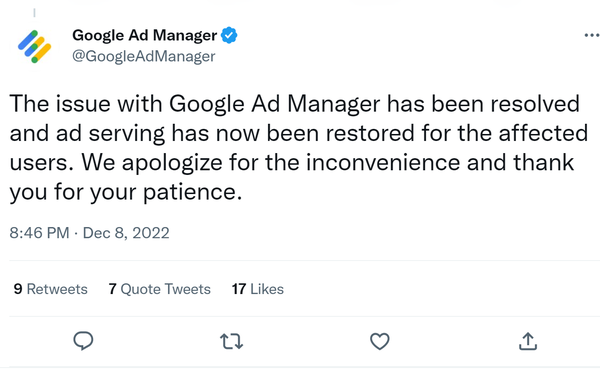 This once again raises questions about agencies' and brands' dependency on Google advertising services.

The December 9 post on Google’s reporting system for Ad Manager reported: “Ad Manager is not delivering ads for the affected users.”

NP Digital’s clients running ads across Google Display Network were impacted by the outage of Google Ad Manager on Thursday of last week. Michael Gullaksen, the company's CEO, in an email to Search & Performance Marketing Daily wrote that impressions, in general, dropped more than 50% on that day but immediately rebounded the following day.

"We also noticed a similar decline in impressions for Performance Max campaigns, which use the Google Display Network to serve display, native, and video inventory," he wrote. "However, there was less of an impression decline than Display campaigns since Performance Max campaigns also use Google-owned properties to serve ads across paid search, Discover placements, and YouTube."

The hardest hit, per news reports, were websites such as The Wall Street Journal and the Los Angeles Times. But the outage was not limited to the largest publishers. It affected all, from small to large.

"The issue with Google Ad Manager has been resolved and ad serving has now been restored for the affected users,” Google tweeted. “We apologize for the inconvenience.”

Still, following the tweet, marketers complained about a variety of issues.

Replying to Google Ad Manager on Twitter, one follower tweeted: “Still cannot download tags of export a campaign or switch between accounts… But, sure, glad it’s ‘resolved.’”

The outage on Google’s advertising platform lasted more than 2.5 hours. Paul Bannister, chief strategy officer CafeMedia, a network of blog properties, told the WSJ that “We and all the publishers we work with are getting no ad revenue. Literally every company we know has been affected.”

Salon lost about $500 in revenue to the Google Ad Manager outage before its ad-tech partner Sovrn bypassed ad requests going to Google Ads Manager, and served programmatic ads from its supply side platform (SSP) partners for the remainder of the outage, Carson McGrath, director of ad management at Sovrn, told AdExchanger.