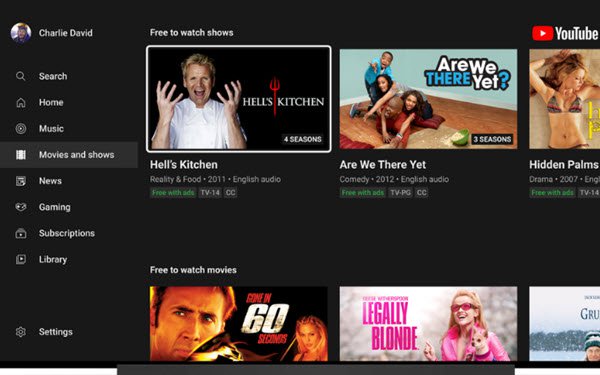 Fresh off of its $2 billion acquisition of rights to the NFL’s Sunday Ticket, the video giant has confirmed that it’s testing a free, ad-supported streaming channels (FASTs) hub — a move that would put it in more direct competition with leading FASTs including Roku, PlutoTV and Tubi, as well as subscription-based, ad-supported streamers (AVODs) including the new ones from Netflix and Disney+.

A year ago, it launched a free, ad-supported platform offering more than 4,000 TV series episodes and more than 1,500 movies from Disney, Warner Bros., Paramount, Lionsgate and FilmRise, among others (shown above).

The new channels hub — described by YouTube as “a small experiment that allows viewers to watch free ad-supported linear channels alongside the wide variety of content we offer on the platform,” will appear in YouTube’s movies and TV storefront, the company told Gizmodo, in a follow-up to a Wall Street Journal report.

YouTube is reportedly working with partners including Lionsgate, A+E Networks and FilmRise on the FAST channels hub test, which will introduce up to 100 titles on the YouTube TV app and YouTube’s mobile devices and web browsers.

YouTube will consider adding more content, including sports and user/creator-generated content, as part of its ongoing efforts to offer “new ways to provide viewers a central destination to more easily find, watch, and share the content that matters most to them,” the company said.

Last September, YouTube became the most-viewed streaming platform, beating out Netflix for the first time, with an 8% share of television viewing as measured by Nielsen’s The Gauge, which also reported time spent on all streaming platforms reaching 36%+ of total TV time. (In the same month, Pluto TV became the first FAST service to capture a 1% share.)

YouTube generated $7.1 billion in ad revenue, or 13% of Google’s total ad sales, in parent company Alphabet’s fiscal third quarter. However, that was the first decline in ad revenue for YouTube since Alphabet started breaking out the video ad platform’s earning three years ago.