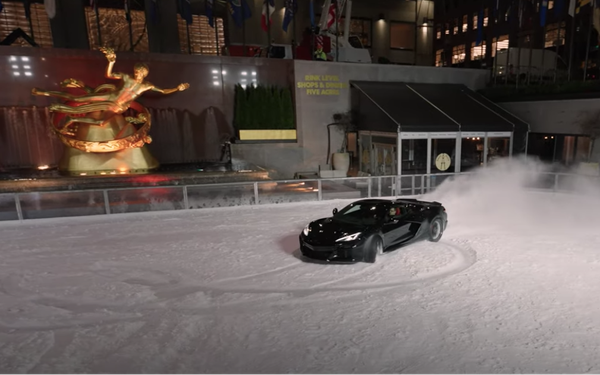 The unveiling was timed to correspond with the 70th anniversary of the brand’s introduction at Motorama in New York City.

It was more than a gimmick. The automaker put the new model through its paces, performing advanced maneuvers on ice to showcase the eAWD capabilities. A 25-second video captures the performance on YouTube.

The E-Ray is the quickest production Corvette in history, clocking a 2.5-second 0-60 mph time and covering a quarter-mile in 10.5 seconds.

The 2024 Chevrolet Corvette E-Ray was on display at center ice at the Rockefeller Center for the duration of the day on Jan. 17.

The E-Ray uses electrification to enhance the driving experience. It is the only sports car pairing two separate propulsion systems to provide naturally aspirated V-8 power with electrified responsiveness powered by eAWD.

There is no need for plug-in charging for the E-Ray’s battery system. The battery is charged via regenerative energy from coasting and braking, as well as during normal driving.

“Corvette has been a halo for Chevrolet since 1953,” Bell says in a release. “E-Ray’s unprecedented blend of confidence, luxury performance, sophistication and style provides a new reason for more people to experience Corvette.”