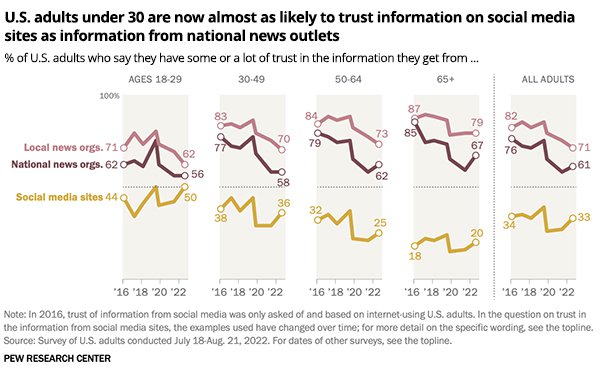 Trust in social media, traditional advertising, and legacy TV news platforms can vary to a great extent. Underneath it all, consumers are doing much more heavy lifting.

Some research studies, including one 2021 Gallup poll, indicate that while young people rely on social media a lot, they don't trust it.

A more recent analysis by Pew Research shows that young media consumers under 30 years of age now trust social media (50%) nearly as much as they do traditional national news platforms (56%).

One late 2022 study from Security.org. went further: That despite falling trust in social media, usage remains high. For example, 42% see untrue content every time they log on to Facebook, compared to 35% for TikTok users and 32% for Twitter users.

And then we have Nielsen's 2021 ‘Trust in Advertising’ -- which showed, 67% of U.S. consumers say they completely or somewhat trust ads they see on TV, and 58% report taking action at least sometimes after seeing them.

Look at all this against trust in the news media itself. YouGov says the most trusted news channel is -- among all U.S. adult citizens -- The Weather Channel, at around 52%,

A late 2022 Gallup poll says that overall, at 34%, Americans' trust in the mass media to report the news "fully, accurately and fairly" is essentially unchanged.

What does this tell you? Not only is there lots of mistrust, but there is also “trust’ -- at certain levels. This continues to come up against broader usage data that shows U.S. citizens can get 60% to 70% of their news content from social media, while 48% getting it from  traditional news from TV news sources.

This can be confusing to many. One November 2022 headline from one research effort may make TV Watch think things might be changing -- that consumers are doing much more work with the media in deciding what’s what.

The headline from Security.Org says: “90% of People Claim They Fact-Check News Stories As Trust in Media Plummets”