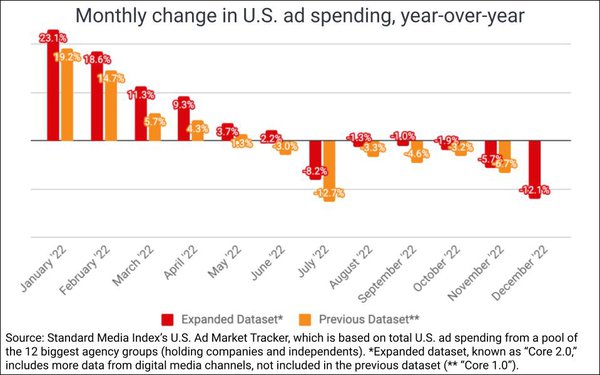 The revised index is based on an expanded dataset, including more granular digital data from a pool of the 12 largest media-buying agencies -- both holding companies and independents -- that comprise SMI's "Core 2.0" database.

Based on the previous version of the index data -- SMI's "Core 1.0," which utilized slightly less comprehensive data -- December would have marked the seventh consecutive monthly decline.

Moreover, based on the index's new dataset, the declines of the past six months have been more moderate -- and the increases greater -- than had been reported by the older dataset.

See the chart above, which shows year-over-year monthly changes for both the expanded and the previous datasets.

The recalibration was made in order to have the most accurate data possible for the index, which is modeled on financial-market composite indexes, which routinely update the companies or markets that make up their indexes.

The revised data also will enable more granular reporting about digital media channels, such as recent social-media ad-spending tracking released by SMI and reported by MediaPost.

The U.S. Ad Market Tracker is a collaboration of MediaPost and SMI designed to provide a real-world measure of U.S. ad spending, based on actual invoiced media buys from the major agencies and their clients. As such, it is mostly representative of spending by big national advertisers.

Future iterations of the index may include more discrete category breaks for digital media channels. Based on the current aggregate digital vs. "traditional" media spending category break, digital accounted for 64% of total ad spending in December, up from 62% in December 2021.