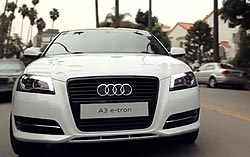 Audi is launching a carbon-neutral ideology along with electric vehicles. So it probably makes sense that the automaker is using the TED2012 conference in Long Beach, Calif., as a bullhorn to talk about its plans. At the conference, and online, Audi is touting its green platforms with a special focus on its electric vehicle pilot program to test the waters in the U.S. for consumer acceptance for its battery-electric Audi A3 e-tron plug-in hybrid car. The vehicle is an extension of Audi’s smallest sedan, the A3.

Jeff Curry, e-mobility and sustainability strategy lead at Audi of America, said in a web video on Audi’s YouTube channel that the vehicle evinces Audi’s efforts to think beyond cars and deal directly with carbon-neutral production and technology. He said vehicles like the A3 e-tron are “One part of our solution for carbon-neutral mobility.”

Audi is touting its new program with a “Social Space” at TED2012 where it is talking about the future of transportation. The Audi Social Space has touch-screen video installations where people attending the conference can speculative on urban mobility scenarios and, per Audi, contribute in real time to the automaker’s live Twitter feed through the #TEDAudi hashtag.

Among Audi’s experimental vehicles getting an airing at TED are its A2 concept EV; the Audi e-gas project, based on offshore wind turbines as a clean-power source; and futuristic cityscapes designed by partner architects of the Audi Urban Future Initiative. Curry, in the video, added that Audi has actually developed a wind farm in the North Sea comprising a lot of big free-standing turbines that power the automaker’s manufacturing plant.

He said the A3 e-tron pilot program will allow it to figure out where Audi fits for progressive luxury car buyers looking at switching to EV auto technology.  The company has tapped San Francisco, Los Angeles, Washington, D.C., and Denver as test beds for the pilot, which runs throughout the year. Through the program engineering teams both here and in Germany telematics data on how the vehicles were used, per a company release.

Ed Kim, who directs industry analysis at Auto Pacific, is also in the video and he argues that it’s pretty likely that affluent consumers would respond to the idea of electric-powered luxury, not least because people are far savvier about the environment, energy, and global events’ influences on both. “There’s a lot more consumer awareness about everything from issues around sustainability to geopolitical issues, and they are making consumers more conscientious about their vehicle choices,” he said. He also says that, particularly for early adopters, consideration is driven more by ideological factors than fuel savings.

Said Curry, “We will integrate the data generated from this program into the launch of a range of Audi e-tron models for American drivers.” The company says that under the e-tron banner will be battery-electric, plug-in hybrid and extended range electric versions.