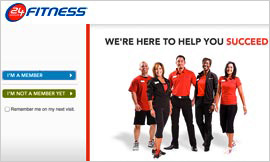 Fitness-club chain 24 Hour Fitness is going to be in London supporting Team U.S.A this summer, and not just with its logo. The chain of fitness clubs, which has had a partnership with Team USA since 2003, is sponsor of the United States Olympic Committee and the Official Fitness Center Sponsor of the United States Olympic and Paralympic Teams. As such, the chain helped design and outfit Team USA’s "High Performance Training Center" in London. Twenty-eight 24 Hour Fitness trainers/athletes will staff the center during the trials and games.

The sponsorship relationships include partnership with four U.S. Olympic and Paralympic athletes and hopefuls for the 2012 Games. These "Team 24 Hour Fitness" athletes will make appearances and be featured in a raft of digital and traditional marketing efforts leading up to and following the summer games. The company is also supporting 500 U.S. Olympic and Paralympic athletes and hopefuls in various ways, including equipping three U.S. Olympic Training Centers in Colorado Springs, Colo.; Chula Vista, Calif.; and Lake Placid, N.Y.

Each of the four spokesperson/athletes (volleyball player Kerri Walsh who won gold in 2008; USA Water Polo team member and silver medalist Tony Azevedo; April Holmes, a U.S. Paralympic Track & Field athlete who won gold in 2008; and Rubin Williams a Team USA track & field hopeful who also works as a trainer at a 24 Hour Fitness) are also doing social media for 24 Hour Fitness. They are on the chain's YouTube site demonstrating signature workouts that relate to their discipline but that are designed for club members. They will also do media tours, club appearances, and will do social-media posts about their experiences in London.

"Our concept this year is centered on bringing 24 Hour Fitness to London," says CMO Tony Wells. This is the second Summer Games in which the club chain helped build, outfit, and staff a high performance center. Wells tells Marketing Daily that the fitness company's involvement on the ground, working with athletes, makes it more than just a branding exercise. "It's an endemic sponsorship from the standpoint that we are considered technical staff, which frees up the sports performance team to help the athletes. That is the crown jewel, and we are using for marketing activation to inform members and consumers about our role."

Wells says those communications efforts include member sweepstakes programs based on gym usage that involve cross-promotion with Olympics partner brands Coca-Cola and Visa. "If you use the gym four times per week, for example, you are eligible to win a trip to the Games, or to the Olympic trials," he says, adding that during the summer the fitness company will do training and member fitness incentive programs within its clubs bearing the theme "Olympic Boot Camps."

A social media campaign encourages the chain's four million or so members to support U.S. athletes either by shooting a picture with a personal message or shooting a video. The "Shout Outs" to athletes will be posted and screened at the Olympic Training Center in London. Wells says about half a million 24 Hour Fitness members follow Olympic athletes on platforms like Twitter and Facebook.

He says that because 24 Hour Fitness has relationships with 17 U.S. national governing bodies, "we are one of the largest supporters of amateur athletics in the country, so it's a big program for us; the positioning really is that if we can help an Olympian reach the games and win a gold medal we can help you in your pursuit of your own fitness goals."

The company, which has 420 clubs in 17 states, also is involved with the New York Yankees, where it handles training equipment for the team's official fitness centers including at Tampa Bay for spring training. The company's relationship with Derek Jeter involves three co-branded clubs.

24 Hour Fitness will also be selling Olympics merchandise at its clubs.