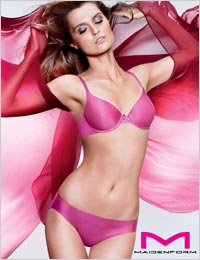 Augmented-reality apps aren’t just for geeks and gamers anymore: Maidenform says it will use AR technology to introduce its new Comfort Devotion line of bras, panties and shapewear later this year.

“We’re really priding ourselves on being in the forefront of the digital and viral space with this launch,” Lucille DeHart, Maidenform’s CMO, tells Marketing Daily. “We understand how women are shopping, and have always tried to be respectful of that. A marketer’s challenge is to figure out a way to engage these digitally connected shoppers in the physical environment. We’re using a free app called Aurasma, which enables us to do that. She can take a picture of a hangtag, and then interface with us in this new dimension. She’s already engaged in that in the virtual space, when she shops online or with a tablet. This will let her do that in the store.”

DeHart, who points to Walmart’s recent use of 3D gaming in the Marvel movie launch as another groundbreaking use of in-store AR technology, says this will allow women to see the difference between, let’s say, a racerback version of one bra on a model compared with the strapless version of another.

It’s all part of the launch of its new Comfort Devotion collection -- including bras, panties and shapewear -- scheduled to roll into stores in December. Calling it the most important product launch the 90-year-old company has made in a decade, she says it is “the first product expression of the new brand platform,” emphasizing modern textiles and comfort. “The photography of the new campaign really shows that optimism, strength and sensuality,” she explains.

In early 2012, it will extend the brand into hosiery and activewear, which will also include shaping benefits, both new categories for the company. While Maidenform markets products to women of all ages, starting with tweens, its core customer is between 25 and 35, she says. “They see us as an expert in the female form, and in fact, many consumers believe we’re already in those markets."

She believes the company’s chances in activewear are especially good, since women tend to need more education about these products than others. “We know that about 8 out of 10 women are walking around in the wrong size bra, in general, and it gets worse with sports bras. Many women are wearing bras designed for high impact for lower-impact sports, when they don’t really need that. It’s like driving a Lamborghini on a side street. And a big part of what Maidenform stands for is educating the consumer.”

Imagery features models swirling in chiffon. In addition to point-of-sale and digital marketing, “especially through our partner Web sites,” she says, traditional media ads are scheduled to break at the end of the year.

“The consumer wants more digital marketing,” she says. “She’s very connected through all her devices. They empowers her to shop the way she wants to shop. So we need to be where she is, and give her that flexibility.”