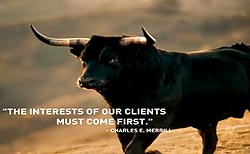 Bank of America is launching two advertising efforts, one for its Merrill Lynch Wealth Management product and the other for U.S. Trust, geared toward high net worth and ultra high net worth individuals and families.

Both campaigns were created by Boston-based Hill Holliday.

The Merrill Lynch effort, which draws from the brand’s iconic bull logo, includes two 30-second TV spots that will run through September. Titled “Belief” and “Goals,” the spots feature a bull running through fields and talk about the “Power of the Right Advisor” and the resources the firm can offer customers.

The campaign focuses on the commitment the brand’s advisors have toward helping clients achieve their goals, says Justine Metz, head of marketing for Bank of America Global Wealth and Investment Management.

Additional Merrill Lynch Wealth Management advertising and signage can be heard and seen during the campaign on radio stations, Bank of America ATMs, and at the home parks of the Chicago Cubs, New York Yankees, Boston Red Sox, Los Angeles Dodgers and San Francisco Giants via the company's Major League Baseball sponsorships.

The U.S. Trust television ads will air throughout the summer during premiere sporting events.

The spots highlight how U.S. Trust's high-touch services go beyond just managing performance and risk to helping families build and maintain legacies across generations, "providing for those who came before you" while "helping prepare those who come next."

"These ads not only deliver a great message in support of the U.S. Trust brand, but also demonstrate how our wealth management offerings reinforce the strength of the entire Bank of America brand," said Jean Fitzgerald, head of marketing for U.S. Trust, in a release.

The spots feature images of life moments, while asking what it means to work with a company that understands a high net worth individual's specific financial needs and goals.

In addition to the television advertising, signage featuring the U.S. Trust logo also will be featured prominently at several Major League Baseball stadiums across the country.