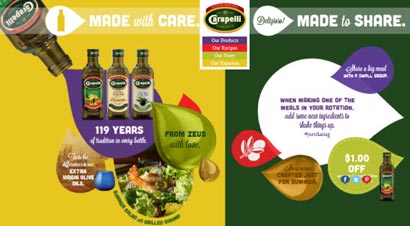 Dubbed “Made with Care, Made to Share,” the campaign’s hub is a relaunched site. The site focuses on offering recipes (Italian-themed summer recipes are currently being featured) and provides links to Facebook, Twitter and Pinterest (as well as promoting the hashtag #justsharing) to encourage users to share the recipes and discuss the brand, Italian cooking and entertaining through their own pages/accounts.

According to a spokesperson for FKM, the Houston-based agency that created the campaign, the brand’s own Facebook and Twitter presences are now in development, and will be launched within about three months during the second phase of the campaign.

The site also offers a $1 coupon downloadable by all (no registration required) through a link into Coupons.com, and encourages users to email the coupon download link to others.

The initial phase of the campaign, which targets the Northeast region (the olive oil category’s sweet spot in the U.S.), also includes online advertising on targeted sites. For instance, on AllRecipes.com, Carapelli has summer recipes flanked by animated ads that push users to its site and the promoted $1 coupon.

In addition, Carapelli is employing in-store marketing and running print ads, including a national buy in La Cucina Italiana and regional buys in luxury food and lifestyle magazines such as Bon Appétit and Food & Wine. (In Bon Appétit, the brand bought both sides of a page, using the first page for its branding message and the flip side for a recipe.)

A third phase of the campaign will introduce more user-generated content/sharing features.

Carapelli, which offers three lines of extra virgin olive oil (premium, organic and the top-shelf Il Numerato line), is Italy’s #1 extra virgin brand, and part of Deoleo S.A., the global olive-oil leader. Deoleo operates in the U.S. through its Med Foods Inc. subsidiary, the U.S.’s leading importer/marketer of olive oil and other Mediterranean food products, including the Bertolli and Carbonell brands.

In the U.S., Carapelli has seen significant sales declines of late. According to SymphonyIRI data (as reported online by competitor California Olive Ranch), for the 52 weeks ending November 27, 2011, Carapelli’s U.S. dollar sales were down 31.2%, to $16.4 million (putting it in fifth place among national brands), and its unit sales were down 38.1% (to 2 million).

Given consumers’ price sensitivity, these trends no doubt partly reflect that Carapelli’s average price by volume jumped by 8.8%, to $4.80 during the 52-week period, the highest increase among the leading national brands.

However, all of the top eight national olive oil brands by dollar sales -- which show a wide spread on average price -– saw some sales declines during the period.

Even the cheapest among the top eight national brands, Capatriti (with an average price of $1.84, reflecting a 7% increase during the period) saw dollar sales decline 10.5% and units decline 13.7%.

And while the long lag between Carapelli’s branding campaigns can’t have helped its performance, the same can be said for many of the other leading national brands.

In addition, imported olive oils face increasing competition from California-produced brands, which position themselves as fresher and “purer” than imports, as well as being less expensive.