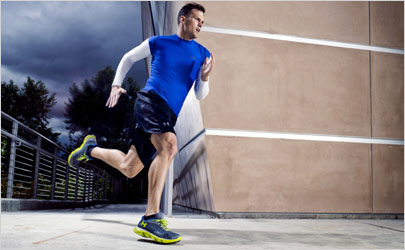 Under Armour is launching a new line of low-weight, high-support shoes for athletes who run. The Baltimore-based sports gear maker unveiled the new Spine RPM footwear line at an event in New York City that also included appearances by the three athletes who will be spokespeople for the brand and the new shoes: Tom Brady, Lindsey Vonn and Kemba Walker. An extensive campaign for the shoe line breaks this summer with the theme "This is how we run."

The message that Spine is not just for runners but also athletes who run will be carried by a TV, print, digital, social media and in-store campaign starting July 9, and featuring the three athletes. The "This is How We Run" campaign, via Crispin Porter + Bogusky, features a 30-second spot starring Brady, Walker and 2011 Pepsi NFL Rookie of the Year Cam Newton. Supporting elements include a 60-second spot with Vonn and Atlanta Falcons Wide Receiver Julio Jones, digital, in-store and billboard inventory, as well as support on various social media channels.

Gene McCarthy, Under Armour SVP for footwear, said UA's expansion into the category runs counter to tradition. "Everyone we compete with is a footwear brand that then got into apparel. We are the opposite, and we think that's a benefit." He said the inspiration for the shoe came with the observation at retail that there were essentially two categories of running shoe: support and lightweight. He said the new shoe's inner support "cage" was inspired by the human spine, and is designed to deliver both strong foot support and be lightweight, at around 9.7 ounces.

The UA Spine RPM footwear collection will be available beginning June 29 for men, women and youth. The adult line will have a suggested retail price of $99.99, while grade school shoes will be $79.99.

Speaking at the event, Kevin Plank, founder and CEO of Under Armour, said the company has been on a steep growth curve since it was founded. "We grew to $5 million in the first five years, to $300 million in the second five and hit the billion-dollar mark in 2010," he said, adding that last year the company grew another 38%. Plank says the next move will be to extend the Spine brand into shoes for specific sports.