LMX Family: Even Preschoolers Get Wired 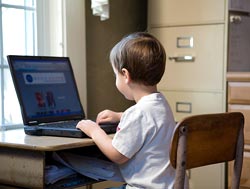 The next generation takes the idea of digital nativism a step further. A lot of preschoolers today can do the multi-screen thing by the time they're three. Will marketers be ready for them when they hit school age, and will they be ready for school and the things that come with it, like books?

A new study from Ipsos MediaCT, “LMX Family,” conducted among 2,700 U.S. families -- 700 with preschoolers and the rest with kids 6-12 years old -- shows that parents are bringing digital devices to kids at younger ages, and that kids at young ages are savvy about smartphones, tablets, laptops and games, and prefer them over traditional media and modes of playing and connecting.

At an event on the findings, Donna Sabino, who leads the Kids & Family Center of Excellence at Ipsos MediaCT, said the very presence of kids gives parents the push to make tech purchases, as many see it as an educational investment. The study, for example, found that 18% of families with kids between 6 and 12 plan on buying an iPad 3 in the next year. By contrast, only 7% of child-free people plan to do so.

LMX Family data show that in preschoolers’ homes there are more laptops, consoles, gaming devices, and smartphones than in homes where kids are six and older. The study found, for example, that among preschoolers' households, 83% reported having laptops; 37% hand-held gaming devices; 76% consoles; and 73% Internet-enabled mobile devices. In households where kids are between 6 and 12 years of age, those numbers are 79%, 22%, 60% and 67%, respectively.

"Gen Y parents are bringing the devices into the house and introducing the youngest kids to them," said Sabino. She added that half of preschoolers' parents let them use their tablets. "We are seeing a change in behavior as a result of this. We see growth in VOD, games, and videos on phones and tablets concurrent with declines in outdoor playing and playing with traditional toys. And traditional activities associated with childhood are becoming digitally supported."

Indeed, the study found that fewer kids than in 2011 are playing with toys, playing outside, watching DVD's, watching live TV and reading a book or magazine.

The study also finds that social media is also a hockey-stick graph as kids get older: while 16% of 6- to 8-year-olds have a profile page on a social network, per the study, over half of 11-year-olds have one, and 94% of all kids with profile pages have one on Facebook. Eighty-three percent of parents monitor their children's privacy settings on their networks, and 78% are their kids' friends on the kids' social network, per Sabino, who said the favorite digital activities for kids are playing games (28%), socializing (24%), watching their favorite TV show (19%); and going to a favorite web site (9%), but that the high ranking for gaming is driven by boys. "Girls are socially oriented, so the top online activity for girls is connecting with people," she said.

Sabino asked presentation attendees what they would imagine kids would want to have with them on a (digitally connected) desert island. The top vote was a mobile phone. But the choice among the biggest group of kids was a laptop. And number two was TV, followed by gaming console (boys again) and last was a smartphone, with only 11% of kids choosing that.

Cara Berman, SVP of Mediavest USA, said that the company is trying to create experiences that connect with kids in the digital environments in which they play. "Whether it's gaming platforms with media partner or experiences."

An example of physical/digital integration is "NBA Baller Beats", billed as the first full-body motion-based NBA video game with a real (Spalding) basketball. The game, which debuted at the Electronic Entertainment Expo in Los Angeles last month and goes on sale this fall, sets real-ball-handling skills like dribbling, fakes crossovers, and around-the-world to licensed tracks from different genres.

"It shows that any product can become tech savvy," said Larissa Faw, a Forbes writer. But she also said these kinds of hybrid efforts can fail, as with Hasbro's Twister dance with Britney spears, where the Twister game is packaged with a speaker device pre-loaded with Spears' songs and a disco ball with lights. "It would have been cool in the Nineties but there are so many ways to use newer technology to make Twister cool."

Berman said advertising is difficult when kids are in the audience because they know early on when a commercial comes on. "You have to provide value and not just to a child but to parents, too, whether it's educational or teaching a new skill." She said the other challenge is measurement. "Overall, we are putting out lots of content and trying to measure on the back end on brand awareness, sales and brand health."