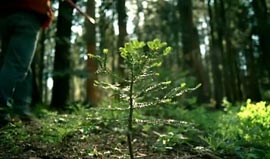 Enterprise Rent-A-Car is debuting a new TV commercial during the 2012 London Olympics.
The spot, which focuses more on patriotism and less on the sports aspect, will run on NBC over the duration of the event, including the Closing Ceremonies. The commercial will air on NBC, NBC Sports and MSNBC and also online on nbcolympics.com.
The effort is tied to Enterprise’s 50 Million Tree Pledge and will have a Facebook component to support the TV commercial.
The integrated campaign will show Enterprise’s appreciation for its customers by giving back to the community and our country through its 50 Million Tree Pledge.
The campaign goal is to make an emotional connection by inspiring current and potential customers to choose Enterprise based on a set of shared values and way of doing business, says Jim Stoeppler, Enterprise’s brand director.
The new “Thanks To America” spot is the latest iteration of the “Enterprise Way” campaign that launched last year. It tells the story about the company’s commitment to plant 50 million trees in North America. Visuals include actual Enterprise employees as well as scenes from National Forests in which Enterprise has already planted trees.

The Olympics provides the perfect context to say “thanks to America” for choosing Enterprise and help the company grow, Stoeppler says.

Enterprise has launched a dedicated tab on its Facebook page that will allow fans to express their thanks to someone and have a tree dedicated in their honor as part of Enterprise’s 50 Million Tree Pledge.

According to a recent survey from Enterprise, 92% of Americans say that experiencing a random act of kindness has a positive impact on their day and 71% of respondents feel that Americans don’t say “thank you” enough.