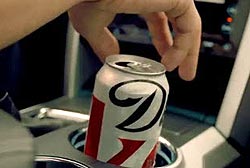 Diet Coke is updating its packaging by permanently switching to a design introduced on limited-edition packaging last fall.

The design, to begin appearing on Diet Coke products as of Sept. 1, was created by San Francisco-based agency Turner Duckworth. It features a section of the Diet Coke logo, cropped to feature the "D" and the "k," set against the brand's signature silver backdrop.

The brand is simultaneously rolling out the latest extension of its “Stay Extraordinary” campaign, with three new 15-second television spots to begin airing on Sept. 3, during the U.S. Open.

One spot, “Commute,” shows a man reaching for a Diet Coke during a traffic-clogged commute. (On-screen messaging: “A little drive for the drive to work.”)

Another, “Studio,” shows a fashion designer sipping Diet Coke as she works on her latest creation. (On-screen messaging: “Another word for ambition is thirst.”)

The third, “Lights,” shows young-adult friends enjoying the beverage during a late-night gathering. (On-screen messaging: “Proud sponsor of all those lights on.”)

All three ads can be viewed on the Coca-Cola site.

* In a Twitter promotion in July, Diet Coke designed mini-fridges stocked with Diet Coke that were delivered to the brand’s most loyal followers.

*The new logo/design is being featured in out-of-home placements around the country.

*The brand has partnered with digital media company StyleCaster to offer a free, 12-page guide featuring fashion and beauty tips and trends for men and women. The piece will be available in the soft drink aisle of major retailers this fall. Exclusive editorial content from StyleCaster trend experts is also be featured on Diet Coke’s Facebook page and StyleCaster.com/dietcoke.

*Through partnerships, Diet Coke will feature special offers for fashion accessories, gifts-with-purchase and sweepstakes at retail and online. At retail, the offers will be featured in various grocery, drug and mass merchandise chains.

*Consumers can redeem loyalty points at MyCokeRewards.com  for limited-edition Diet Coke-branded merchandise (such as umbrellas, bags and pens) featuring the new logo.