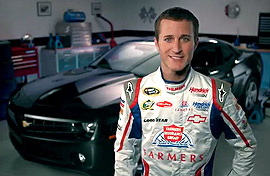 Farmers Insurance is angling for pole position on the NASCAR track. The company, which this year signed a three-year deal with Hendrick Motorsports around Chevy Impala driver Kasey Kahne, is activating the program around NASCAR's Sprint Cup series with a sweepstakes.

The "Start Your Engines," program, on Farmers Racing Facebook page (facebook.com/FarmersRacing), offers a grand prize of up to $35,000 toward any Chevrolet vehicle. Participants go to the site and try to start a virtual hendrickcars.com-branded car with a virtual key one has to "grab" off a wall and insert into the ignition. Kahne is featured in a series of humorous videos there, touting the eight-week-long promotion.

Charles Browning, VP of community branding for Los Angeles-based Farmers, says the sport is a good platform because NASCAR has a great marketing operation and Kahne has a great personality for the brand. "He's more on the timid side, and when he reveals himself as fun and lighthearted, it's that much better," he says. "NASCAR just does a really good job of creating the right atmosphere." The insurer did a five-month test with Hendrick last year before signing the extended deal.

The promotion is being executed on social, "which is a really good way for us to engage that fan base at a different level both to create awareness of our company and who we are," says Browning. The company is also touting the program via email blasts to loyalists and direct mail to prospective customers. Kahne is also touting the relationship on his own social channels.

Farmers is also activating with experiential programs at 22 NASCAR races, with a special focus at 13 tracks where the company has a full-blown fan engagement experience. Browning says these will have a "rotisserie" type NASCAR car display and sessions with the likes of former crew chief and Fox race analyst Larry McReynolds, who will host sessions on things like how technology developed by NASCAR teams advances consumer auto safety.

Competitors are also busy in NASCAR: GEICO sponsors Germain Racing driver Casey Mears, and then there's the Nationwide Series."NASCAR has the second-most loyal fan base only behind the NFL," says Browning. "And research shows that these loyalists are more likely to buy from a brand that plays in the NASCAR space; but they want to see you being loyal and genuine in the sport. So we go out of our way to have consumers meet us and engage with us." He adds that fans are also more likely to own motorcycles, RV's, ATV's, Jet skis and other (insurable) mobility.