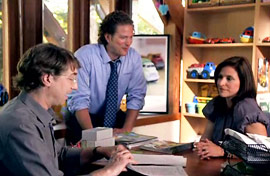 Being a banker to small business is about more than just reviewing plans and approving (or not) loans. In a new marketing campaign, Chase’s Business Banking unit is telling the stories of several companies it has helped get off the ground, and how its work has helped build local communities and strengthen the American economy.

“This campaign showcases companies that are helping the Main Street economy recover,” Donna Vieira, marketing director for Chase Business Banking, tells Marketing Daily. “We have the philosophy that, by really getting to know our customers, we can anticipate their needs and partner with them to succeed. This campaign is from our customers’ perspectives, and their stories are as unscripted as they are compelling.”

The campaign, which carries the tagline “Mission Main Street,” uses print, digital, social media and radio to profile seven Chase Business Banking customers across the country. The businesses include: Green Toys, a San Francisco-area company that turns recycled milk jugs into toys; Outside the Lines, a contractor that looks to meld art and construction in Orange County, Calif.; Diamondback Airboats out of Cocoa, Fla.; and SPEAR, a physical therapy practice in New York.

The companies were chosen not only because they’re U.S.-based and growing during a recession, but also because they make a greater impact on their communities beyond just business. “[These businesses’] stories are as unique and inspiring as they come,” Vieira says. “We are so honored that they chose to be part of this special campaign, which is in a format that allows them to share their missions with the world.”

Short versions of the videos will run on cable television, while dedicated microsites will host the longer-form videos. Targeted digital media buys will also deliver the businesses’ stories to other local small businesses. The long-form videos and hyperlocal targeting are new approaches for Chase’s business banking unit, Vieira says. The approach is particularly useful for a brand such as Chase, which is more mature in some markets than others.

“The ‘Mission Main Street’ campaign is a fully integrated advertising and marketing campaign that will feature TV, radio, print, digital, paid search and social media, so it is definitely broader and more significant than our previous campaign, which focused on targeted print advertising,” Vieira says. “The campaign will run through multiple channels in markets where these businesses are based, and where our local Chase bankers work with them.”