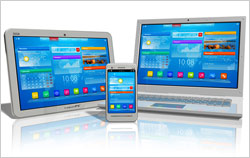 With a growing share of Web sites’ traffic coming from mobile devices, the need for tracking a media property’s full digital audience has become increasingly acute.

To that end, comScore on Thursday unveiled a beta version of its cross-platform measurement system offering consolidated audience metrics across Web sites, apps and video content on PCs, tablets and smartphones. The rollout of Media Metrix Multi-Platform reporting will give a boost to more mobile-centric sites, like Pandora, Twitter, Yelp and Instagram.

Pandora, in particular, would benefit from the change, vaulting from No. 61 in the current Media Metrix rankings, based only on desktop traffic, to No. 23 under the new Multi-Platform accounting. That’s because the vast majority  of the Internet radio service’s total unduplicated audience of 60 million comes through mobile.

A side-by-side comparison of the top 30 sites for September under the existing and new, combined measurement approach showed large audience gains for Twitter and Yelp, too, but much less dramatic moves as most of their users are still on the desktop Web. Twitter’s audience, for example, increased 54%, but it only moved up one spot, to 26th.

Among other Multi-Platform rankings changes highlighted by comScore:

-Google Sites remained the No. 1 property -- the only one to surpass 100 million unique visitors across both desktop and mobile channels.

-Facebook moved up one spot to No. 3 in the multiplatform rankings, the top property in terms of total engagement in the mobile channel.

-Amazon, eBay and Walmart each reached at least 20% more visitors across platforms than via desktop alone.

-ESPN had the second-biggest jump in the rankings, moving up four places to No. 19, with an incremental mobile audience of 36%. The Weather Channel also went up four notches, to No. 20.

Regardless of ranking, audiences are bigger across the board.

ComScore took a step toward combined mobile and desktop reporting in June 2011 with the release of its Total Universe report, but that effort relied on publishers’ tagging their digital content. A comScore spokesperson said the Multi-Platform system requires no tagging, similar to current Media Metrix reporting.

Following beta testing with clients over the next several months, comScore plans to transition to cross-platform measurement as the standard for reporting of audience size and rankings by the second quarter of 2013.