Wellmark Gets Ahead Of Curve 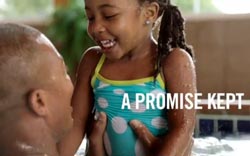 The “Promises Matter” effort from Campbell Mithun is an example of how insurers will have to change their marketing game due to the looming 12/14 deadline for states to decide how they will create their health insurance exchanges.

A changing business landscape is an important time for Wellmark to be very clear in how the company is doing brand communications, said George Hanna, executive vice president, sales and marketing.

“Regardless of the upcoming shifts in the health care industry, continuing to demonstrate our value and strengths to our members and consumers is always important -- especially given the increased choices many consumers will face as our industry moves toward a more retail marketplace,” Hanna tells Marketing Daily.

The campaign -- which includes brand video, TV, print, digital banners, out of home and radio -- is running in South Dakota and Iowa. The campaign will run regionally with a variety of related executions through 2013.

“By showing our belief in and respect for the power of promises, this campaign brings the company’s core belief of integrity to life in a very human way,” Hanna says. “When people are managing something as important as their health, that really does matter.”

The campaign showcases everyday scenarios of real-life promise keeping, from a dad who catches his jumping daughter in a pool to a couple celebrating decades of marriage.

Other executions actually personalize Wellmark by featuring real employees: Laura, from claims, promises “I will see a face behind every claim”; Dennis, from customer service, promises “I cannot cure pain, but I can ease pain.”

Eight staff members are featured in the brand video, whose voiceover says: “At Wellmark, we believe the promises a company makes are no different than the promises people make.”

“You can’t bring an idea like Promises Matter to just any client. The company has to believe it,” said Reid Holmes, executive creative director at Campbell Mithun. “Our research proved that consumers who put their trust in Wellmark aren’t just putting blind faith in a company, but in people who believe integrity is fundamental to how they work.”