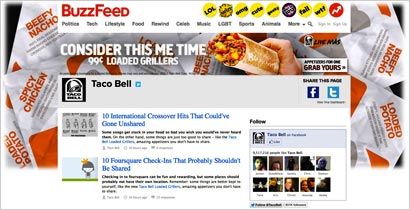 Taco Bell on Thursday kicked off ambitious integrated campaigns for a pair of new products -- its new “Loaded Griller” and a 12-taco variety pack -- featuring custom executions across online and mobile platforms such as BuzzFeed, Pandora and PayPal.

Driving both ad efforts running simultaneously today through Feb. 3 is the aim of connecting with quick-serve restaurant chain’s “digital-centric” customers through popular social media, video and mobile properties where they are likely to be found.

The campaigns -- developed by Digitas, Taco Bell’s digital agency of record -- also bring an irreverent sensibility intended to appeal to the young-skewing audience it’s after.

The larger of the two is the push behind the 99-cent Loaded Griller, a savory snack of nachos, chicken, or fried potatoes, wrapped in a grilled tortilla. A centerpiece of that effort is a custom integration on BuzzFeed in which scrolling over the row of buttons for sharing articles causes them to scatter, replaced by a Griller message reading: “Not everything needs to be shared.”

On Web radio service Pandora, the QSR chain is sponsoring the “Thumbs Up” button across both the desktop and mobile, with ads dayparted around mealtimes. When someone gives a song the Thumbs Up on Pandora, they’ll see a Griller message. Since roughly 80% of Pandora’s traffic comes from the mobile side, the ad will likely capture most attention on devices.

On the video front, Taco Bell is focusing on Machinima -- the video network geared to 18- to-34-year-old gamers -- with four sponsored videos featuring game enthusiasts talking about tips and tricks they wouldn’t normally share. Each video is preceded with a pre-roll spot playfully informing viewers that the content is only for them and not to be shared.

In addition, Taco Bell is running ads on Yelp around appetizer- and happy hour-related searches, Page Post ads on Facebook and Promoted Tweets on Twitter, among other executions promoting Loaded Grillers.

For the new Variety Taco 12 Pack, the company is targeting football fans in connection with the raft of College Bowl games airing over the holiday season. That means a heavy presence on ESPN.com, including takeovers of the desktop and mobile home pages on specific days, sponsorship of the college football scoreboard, and sponsoring of related ESPN properties like the ScoreCenter app.

Taco Bell is also using the mobile channel to help drive customers directly into stores. One way is through advertising in mapping and turn-by-turn directions app Waze. As the app’s first national advertiser, Taco Bell’s placements include branded pins on the map signifying restaurant locations and a full-screen takeover when a driver stops in the vicinity of a Taco Bell search.

The company is running location-based ads through the PayPal Media Network, reaching 70 million mobile users. Banner ads feature live scores of BCS games, and when no game is on, standard banners that will appear when a user is within three miles from a Taco Bell. All of the ads direct people to a landing page showing the chain’s three closest outlets, which a user can click for directions.