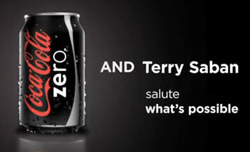 Coke Zero was clearly well-prepared to cap off its long college football marketing season by scoring with Crimson Tide fans.

In the ad, Coke Zero and the coach’s wife, Terry Saban, salute “what’s possible” through her narration of moments from the coach’s life in which he overcame the odds to achieve things that others said he couldn’t do.

The theme connection: “Throughout his life and career, Coach Saban has shown what’s possible. Coke Zero, which made it possible to ‘Enjoy Everything’ by combining Real Coke Taste and Zero Calories, salutes that spirit,” said Andy McMillin, VP, Coca-Cola Trademark, Coca-Cola North America.

Coca-Cola is also reminding Crimson Tide fans of its past links with the coach and the University of Alabama. For instance, the company’s PR on the TV spot notes that as a child, Saban “used to stock the Coca-Cola cooler at his father’s service station,” and that he drove a Coca-Cola truck to earn extra income while he was a graduate assistant at Kent State (hence the “couldn’t make ends meet” mention in the ad, which is accompanied by a shot of a Coca-Cola truck).

Coke also mentions that Saban has participated in local Coca-Cola marketing activities since joining Alabama in 2007, that the company supports his Nick’s Kids Foundation, the brand’s history of custom marketing programs for Crimson Tide fans, and other ties to the university over the past seven decades.

Following its premiere on ESPN, the 30-second TV spot is also airing on local stations across Alabama. It’s also posted on YouTube, CokeZero.com and MyCokeRewards.com, with links to Facebook, Twitter, Alabama fan Web sites and other digital and social media.

Coke Zero will also salute the University of Alabama’s championship with locally available commemorative packaging and other local activities and communications.

The ad was created by Atlanta-based MELT, a marketing agency that helps Coke Zero develop sports and college programs.