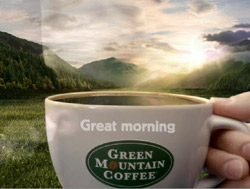 Green Mountain Coffee Roasters’ (GMCR) consumer research confirmed that for coffee drinkers, having a better-quality cup of java really can result in a better day.

The campaign is dubbed “Perspectives,” in part because the creative -- from Y&R New York -- is shot/shown from the first-person or “internal” perspective of the coffee drinker/viewer, Green Mountain Coffee senior brand manager Derek Archambault tells Marketing Daily.

In addition, the campaign is envisioned, over time, as conveying other positive “perspectives” on how quality coffee, and Green Mountain’s unique qualities  in particular, can improve coffee drinker’s general outlook, as well as a given day, he says.

The first TV spot, launched Jan. 7, shows the words “good morning” superimposed over a scenic sunrise, then segues to a shot of a cup of Green Mountain bearing the words “great morning,” in front of the same sunrise.

Voiceover messaging: “Everything’s better with a great cup of coffee…Exceptionally smooth, with a harmonious blend of flavor and aroma. Green Mountain Coffee, for your Keurig brewer. Brew a better day.”

The new campaign represents an “evolution” of the brand’s previous advertising, says Archambault. The core target audience remains the same: higher-income-household women 30 to 55 who are knowledgeable about quality coffee and brewing systems. But the new approach aims to build on Green Mountain Coffee’s substantial recent-years’ growth by better resonating with prime prospects for conversion to the brand, as well as maintaining and increasing sales among existing brand fans, he says.

Green Mountain’s previous advertising also used images of mountains and other landscapes -- but they were illustrations, as opposed to the new campaign’s “crisp, clear” photographic images, which bring greater “consumer relevance” and “stopping power” in TV and print, in particular, he explains.

And while both campaigns are grounded in the concept of quality coffee’s inspirational value, the previous campaign’s tagline, “A revelation in every cup,” was a somewhat “weighty” concept, at least for those who weren’t already familiar with the brand, Archambault notes.

This first TV spot (in 15- and 30-second versions) will run on national network and cable through mid-June.

The new creative is also featured in print ads appearing in January issues of magazines -- Woman’s Day, Family Circle, Real Simple, Better Homes and Gardens, OThe Oprah Magazine, Yankee and others. A winter-themed print ad will launch in February 2013 magazine issues, and a foliage-themed version will run in September issues.

The campaign’s imagery is starting to appear in the brand’s social media, and more ambitious social media elements are in the works, Archambault reports. Digital advertising -- including display ads and more “breakthrough” formats  -- will launch in March, he says.

The new campaign’s creative is also designed to highlight and reinforce the connection between GMCR's Green Mountain Coffee and its Keurig brewing systems among both existing and potential Keurig system owners,  Archambault confirms.

That connection will continue to be made in all of the campaign’s elements, including digital and social, according to Archambault.

Although not alluded to by Archambault, there has been much speculation about how some recent developments might affect GMCR’s businesses.

GMCR realizes significant revenues from licensing agreements with a variety of non-GMCR coffee brands, including Starbucks and Dunkin’ Donuts, to sell their coffee brands in the K-Cups designed for Keurig brewers. (Late last year, Starbucks CEO Howard Schultz stated that Starbucks brands accounted for 25% of the total K-Cup market.)

But two key patents protecting GMCR’s rights to being the only company that could produce single-serve pods compatible with the Keurig system expired last September, allowing other, unlicensed makers to produce and advertise their own Keurig-compatible pod versions. The specter of new competition after the patents’ expiry created speculation about GMCR’s future performance prospects.

And while it has continued its K-Cup partnership with GMCR, Starbucks last fall launched its own single-serve brewing system (Verisimo) and pods (neither K-Cups or the GMCR V-Cups designed for its premium Vue brewer system are compatible with Verisimo).

GMCR’s first quarterly results after the patents expirations helped allay analysts’ concerns.  For its fiscal Q4 ended Sept. 29, net sales were up 33% and net profit was up 22%, and the company raised its outlook for 2013.

In addition, GMCR CEO Larry Blanford reported that the company had seen no evidence to change its assessment/assumption that all unlicensed K-Cups competitors will represent roughly 5% to 15% of Keurig-system share, starting at the low end of that range in 2013 and perhaps moving to the higher end over two to three years, reported The Wall Street Journal.

In his fiscal Q4/year-end conference call with investors, Blanford pointed out that GMCR already sells 32 brands (spanning 200 varieties) of K-Cups through partnerships with non-GMCR national brands and retailers’ private-label brands, and that consumers who buy Keurig brewers tend to stick with favorite brands. He also noted that competitors would find it hard to match GMCR’s K-Cup volume-based cost efficiencies, and that GMCR still holds a number of patents that will continue to provide protection against non-licensed single-serve pods.