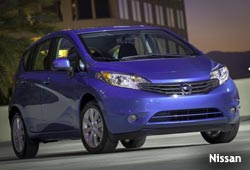 Nissan has a lot of changes in strategy, on mobile vehicle marketing communications, and in the air. Literally. The air in Nissan's exhibition space at the North American International Auto Show was suffused with the scent of green tea.

"The point is to create an atmosphere that stimulates the senses," says Jon Brancheau, VP marketing at Nissan North America's Nissan brand division. That's pretty much the kernel of 99% of auto product development and marketing, so there's no harm in starting with establishing an essence in the ether. And stimulating the senses is part of Nissan's plan for the redesigned Versa compact sedan and hatch, which go on sale in the U.S. this summer. He says the brand might take that green tea scent to its global retail and show spaces. The Versa's new name, Note, also aligns with Nissan globalism: Note is the car's name in the China market, although the U.S. -- Nissan's largest market -- gets concessions: here, it will be the Versa Note.

"We want to have global consistency," says Brancheau, who tells Marketing Daily that the brand's "wouldn't it be cool" campaign -- launched last year first for the redesigned Altima, then for the Pathfinder -- reflects a drive for consistency in the U.S. "Differentiation for the Nissan brand comes partly from having a consistent, distinct position around innovation," he says.

For the Versa Note, Nissan seeks 30- to-40-year-olds. "We want to attract younger people, who have very active lives, want great fuel economy and need versatility. We'll probably use the 'wouldn't it be cool' creative [which shows Nissan cars exploding into chunks that solidify into different vehicle features before reassembling as the car] but in a different way. It will be very relevant to that target, who are looking to integrate into their lifestyles: cycling, surfing, scuba, pets, family." He says creative messages will high-five the car's 40-mpg performance and its onboard Nissan Connect telematics and infotainment system.

Also getting a global focus, by necessity, are Nissan's digital and social media efforts, per Erich Marx, director of interactive and social media marketing at Nissan. He tells Marketing Daily that digital elements have to reflect a global audience because U.S. consumers travel widely, and Internet and social media traffic constitute a de facto global audience. "Our Facebook likes are 55% international," he says, adding that the automaker has 1.2 million followers on its Facebook brand page.

For the Americas, the automaker has a best practice launched a year-and-a-half ago that allows Latin American, U.S. and Canadian divisions to tap each other's ad creative when appropriate. "We recognized redundancy in advertising production," says Marx. "Now, when we do a TV shoot, creative might be used from other markets." He says Nissan's Americas teams converge once a month in a brand steering committee context. "It's marketers from Brazil, Mexico, the U.S. and Canada, all in the same room, where we share plans."