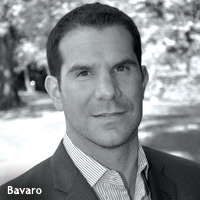 The appointment marks Bavaro's return to Resolution after a stint at Publicis Groupe’s Digitas, where he was senior vice president, performance media.

In his new role, Bavaro will focus on expanding Resolution's service offering, including product and business development and acquisitions. He will also help lead the agency's ongoing consolidation of OMG's global search operations under the Resolution banner -- an effort that began last year and is expected to be completed in 2013.

Bavaro’s stint at Digitas was brief, having joined that agency in June 2012. But when he was offered the chance to return to Resolution he took it, he said -- largely because he felt that the agency and the organizational setup at OMG were a better fit.

“The big task of consolidating globally and having that kind of scale and footprint really excited me,” he said. “We manage huge global brands like Pepsi, Levi’s and Visa that want that kind of scale in executing search, real-time buying and content management,” Bavaro added.

Globally, Resolution now has billings in excess of $1 billion and more than 500 staffers worldwide. "The knock on search agencies is they don't have feet on the street," said Bavaro. "You don't have people sitting in a local market like Singapore who can translate and localize campaigns and understand the nuances. We have that."

On the product development front, Bavaro said that expanding ClearTarget globally is a top priority. “That's a differentiator for us,” he said of ClearTarget, currently a U.S.-focused offering that combines search query stats with client Web analytics and third-party segmentation data.

Another top task is “rounding out our approach to content marketing.” Client-owned content that is relevant and “share worthy” is often the best-performing ad unit, he said, citing the success Old Spice has had with a series of viral videos.

Resolution handles search and related media chores for sister media shops OMD and PHD, as well as for other agencies within Omnicom. Bavaro said another key focus will be to further develop business for Resolution as a standalone brand in the digital agency market.

Bavaro reports to Alan Osetek, President, Resolution Media. In his first stint at Resolution, Bavaro was managing director of East and West Coast Operations. Earlier, he was general manager at MediaWhiz Holdings.