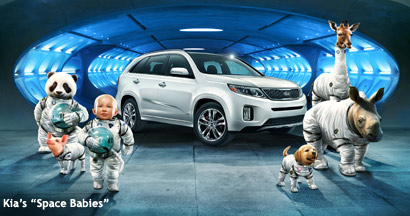 As it has for the past three years, Kia is getting some awareness-building action in the Super Bowl, joining Hyundai, Mercedes-Benz, Volkswagen and probably a couple more automakers in the attention scrum. Super Bowl spots almost always play with more hyperbolic branding efforts versus straight-up product pitches (especially if you really have no product, like GoDaddy. Okay, they sell domain names, but whatever).

Kia -- as is frequently the case with a lot of Super Bowl advertisers -- is itself going a bit outside the product corral to connect, humorously, with a larger issue. In this case it's the ontological conundrum of baby origins, and how to explain that to kids. Here, Kia is connecting the human provenance question to the features of its Sorento crossover.

The fourth-quarter spot, via AOR and sometime-comedy-workshop David & Goliath, has a parent borrowing from the Scientology playbook to explain where babies come from: babies and other cute mammals come from the planet Zeno, I mean “Babylandia.” The child, however, has his own theory -- actually his friend's, more in line with the fertilization idea that seems to be the way things actually work, much to dad's chagrin. What does he do? He goes to Kia's voice-activated UVO informatics system to hurriedly change the subject.

Also in line with what is becoming Super Bowl tradition, an expanded version of the ad, called “Space Babies,” is hitting YouTube.com/Kia leading up to the game. Last year, the automaker went another route with ultimate guy-fantasy ad putting its Optima sedan on a racetrack with Motley Crue playing, and a Victoria's Secret model holding the checkered flag: Kia put the spot in movie theaters before the big game. It's doing that again this year, putting “Space Babies” in 33,000 movie theaters nationwide via Screenvision’s The Limelight pre-show and National CineMedia’s FirstLook ad platform. The effort is also part of a larger program for Sorento's “It has an answer for everything” on TV, cinema, digital, print, social media and in-dealership components.

Kia says that the first spot of the campaign touts power-folding mirrors and power liftgate, which helps a dad deal with a narrow parking garage space. That ad is now on TV and Kia's YouTube channel, per the automaker.