Q&A: Joe Montana Dishes On Life As A Stain 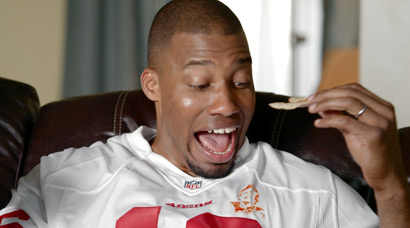 Talk about a rush for San Francisco 49ers fans -- not only did the second half of Super Bowl XLVII give them the thrill that their team might actually come back to win, it also included an appearance from 49ers legend Joe Montana, albeit as a salsa stain on a jersey. (He also appears in the Tide detergent commercial as topiary.)

Montana, a Hall of Famer who started and won four Super Bowls for San Francisco himself, phoned Marketing Daily to discuss life in the locker room and the laundry room. Here’s what Joe Cool -- father of four, including two college football players -- had to say about the Procter & Gamble spot:

Q: You’ve been on camera in many commercials. What did you think when you heard about being off-camera for this one?

A: The first thing I thought was, “Wow, how are they going to make the stain look like me?” And they did a good job!

Q: We thought you looked good as the topiary in Montanaland, too.

A: The stain looked a little better.

Q: So the spot spoofs the crazy/stupid/funny superstitions football fans have. Did you have any of your own?

A: No, I really didn’t. But I watched tons of them. The worst was our old head coach, George Seifert. In practice, he wouldn’t walk on the 49-yard line, for example. And then he’d walk all the way around the 49ers helmet on the field, then back along the 50. Someone once made the mistake of telling me he had to be the last one out of the locker room before a game, so on our way out, I’d say, “Oh, wait, I have to go to the bathroom,” and then he’d have to do a 360 so he could leave after I did.

A: Well, I wouldn’t ride the bus before a Super Bowl. But that’s because one time, we got stuck in traffic before the game, and I never wanted it to happen again.

Q: When the spot aired on Sunday night, what did your friends and family say? Was there any razzing?

A: Actually, I watched the game from our hotel in New Orleans. My son is at Tulane University, and so we went down with friends and family. But it was so tough getting around on Bourbon Street that I just said, “You guys go. I’ll watch from here.” But my wife liked the spot, right away. And she’s my first judge on these things.

Q: So how do you think you stacked up against the competition, ad-wise? Did you have a favorite spot?

A: Budweiser. They always do such a great job. It’s hard to beat an animal.

Q: What did you think of the game?

A: I thought it was great for the 49ers to get back to the Super Bowl. It’s been a long time. It’s a younger team, and they’ll be good for a few more years. Hopefully, they make it back there. They had opportunities to win, and unfortunately, the Ravens took advantage of more opportunities. It was a good game.

Q: Are you planning anything else with Tide?

A: There are things being discussed, but off the top of my head, I’m not sure. Tide has been in my family since I can remember. I get laundry duty. Not all the time, but when the boys come home from school. My wife really tries to get them to do it. But when they are both here and both working out, it does pile up.

Q: What did you like best about the commercial?

A: It was fun how they played both sides, poking fun not just at player superstitions but spectators as well, and then both teams. It was fun to be a part of.

Q: The spot gave the woman the last line. And since it was, “Go Ravens,” I guess she was right.

A: Isn’t that the way it always is?