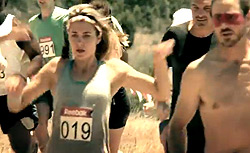 Reebok is kicking off a new global marketing campaign called “Live With Fire” about the more holistic benefits of exercise. The effort -- comprising TV, print, digital and out-of-home media as well as consumer events and activations -- focuses on people who have made major lifestyle changes by getting off the couch and being active with others. Rather than using the tried and maybe-not-true method of using cyborg-level athletes whom most of us can only dream of being as proxies for products, Reebok is going more toward the real-people approach.

The campaign -- which includes a new TV spot -- extends its core training and running focus to yoga and dance, partly to appeal more to women. There's also a renewed focus on walking, per the company. Reebok says the new campaign is under the aegis of last year's “The Sport of Fitness Has Arrived,” spotlighting the CrossFit shoe line and the idea of exercise as a community activity rather than -- to mix analogies -- a solitary and Nietzschean battle for self-mastery through Sisyphean workouts.

Yan Martin, VP of brand marketing for the company, emphasized what might be called the "us-and-us" rather than "us-and-them" approach to health and exercise. “We’re not featuring the aspirational actions of today’s superstar millionaires in this campaign; we’re celebrating individuals who find purpose by pursuing their passions," he said. "We believe that everyone has the potential to transform their lives through fitness and creativity, and want to encourage this discovery, whether it’s through CrossFit or group training workouts, running clubs or Spartan races, high-energy Latin Dance classes or physically challenging Yoga classes, intense fitness walks or another active pursuit.”

The campaign launched on Feb. 15 with a TV advertisement airing on ESPN. Tactical support will come through print and digital media elements. The TV spot is a tableau of seven group activities: people doing reps; a running club doing sprints; a Latin Dance class; two women catching on an early morning walk; two men racing each other to the top of a stadium; a yoga class; a group doing an early morning workout; and Spartan racers.

The ad features yoga expert and Reebok ambassador Tara Stiles (who has also backed Nissan's "Master the Shift" campaign with similar themes around healthy lifestyle), and Josh Bridges, runner-up from the 2011 Reebok CrossFit Games. The company said the ad is peopled with runners, dancers, yoga instructors, and fitness walkers using CrossFit products. Backing music is from Driemanskap, a new alt band. Hip-hop artists and Reebok endorsers Rick Ross and Tyga are featured in print and digital for the Reebok Classics line. Other products getting focus are RealFlex and ZigTech, the new  SubLite footwear, and Reebok Δ Apparel.

On the digital front, there's a new Reebok Fitness app for Apple and Android that has workouts around walking, running, dance, yoga and training.

A social element adds a chapter to a partnership with filmmakers' online community  MOFILM, to tap new filmmakers to make films about inspirational people. Reebok says it will tie the filmic stories with a social media campaign to inspire people to share their own stories.