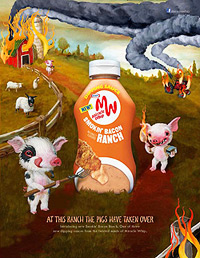 Miracle Whip’s Dipping Sauces, launched in January, are getting their own, playfully “twisted” campaign.

The “twisted minds” campaign creative represents an extension of the “irreverent sense of humor” and independent spirit positioning that Kraft has been cultivating for the Miracle Whip brand over the past five years – and a compelling way of making the 80-year-old brand’s fans aware that it’s branching out to offer new product innovations and flavor profiles, says Scott Glenn, senior associate brand manager for Miracle Whip and other Kraft “enhancers” (such as mayonnaise).

Working with its creative agency of record, Mcgarrybowen, Chicago, Miracle Whip developed detailed back stories personifying each flavor, and then had graphic artist Mark Brown of Brown Town Studios -- known for creating surreal landscapes and images for album and book covers -- bring those personalities to life as original, hand-drawn, hand-painted characters depicted in “twisted” scenarios.

The Sassy Sweet Tomato flavor is personified by “boxing” tomatoes (headline: “It’ll Kick Your Sass”), and the Kickin’ Onion Blossom is personified by a “ninja” onion (“It’s a Roundhouse Kick to the Tongue”). Each of these print ads also has copy introducing the specific flavor as one of three new dipping sauces, from Miracle Whip’s “twisted minds.”

The print ads will appear not only in food and women’s lifestyle magazines but -- reflecting the known “passion points” and media habits of Miracle Whip’s fans (comprising about equal shares of men and women) -- in entertainment, sports and music magazines including People, US Weekly, Entertainment Weekly, Sports Illustrated, ESPN Magazine and Rolling Stone, reports Glenn. Where possible, the ads are in highly visible positions in the magazines (SI’s back cover, for example), he notes.

Print “over-indexes” for the dipping sauces category, which is seeing strong growth due to the increasing popularity, particularly among families, of dipping vegetables, chicken wings and other items in flavorful sauces, says Glenn. However, the category is at present underdeveloped, making it a prime opportunity for Miracle Whip, he adds.

The original artworks are also being employed in banner and video pre-roll ads in similarly targeted sites, and in Miracle Whip’s social media. (Its Facebook page, currently showing about 234,000 “likes,” is its primary social engagement platform, although the brand also has a growing Twitter presence, currently showing nearly 17,000 followers.)

In addition, radio spots will be aired in some markets, to support partnerships with specific retailers.

The suggested retail price for the new dipping sauces is $2.99.