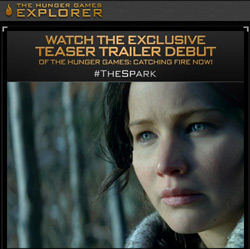 Movie sequels are intended to be bigger, better and more engaging than their predecessors. And so are their marketing campaigns.

For the launch of its November release, “The Hunger Games: Catching Fire” (a sequel to last year’s “The Hunger Games”), Lionsgate entertainment has teamed once again with Microsoft’s Internet Explorer to set up an online destination for fans to find out not only about the movie, but also what other people are saying about it.

“For us, our fans are discovering and consuming content on all devices. We wanted to create an experience for all those devices, and they focused on that,” Danielle DePalma, senior vice president of digital marketing for Lionsgate, tells Marketing Daily. “We really looked to [Internet Explorer] to bring the technology to the story we wanted to tell.”

The site, The Hunger Games Explorer, is designed to showcase all of the content associated with the Hunger Games movie, including trailers (the first was released last night after debuting on the MTV Movie Awards) and commentary and reaction from fan blogs, as well as Facebook, Twitter and Tumblr feeds, DePalma says. The site will be the digital home for fans to track every development in the franchise up until the film’s release in November.

“It really is about his wonderful fan base online, and we wanted to create an experience that would bring them into the [film],” she says. The site will serve as a social aggregator displaying both official and fan-generated content from various social media platforms. (Users will be able to filter the content, so they can see just what they want to, DePalma says.)

The site was built to be used on multiple platforms, including tablets, PCs and smartphones, which was a key technology component that Internet Explorer brought to the promotion, DePalma says. Taking full advantage of multi-touch functionality, users can swipe and scroll through the content by flicking their fingers. They can also call attention to content by “sparking” the objects.

“With The Hunger Games Explorer, we wanted to change the game for how a movie can be extended to the Web, providing an intensely immersive experience for fans,” said Roger Capriotti, director, Internet Explorer marketing, in a release. “The Hunger Games Explorer continues IE's work to bring innovative experiences to the Web, showcasing what's possible with amazing content and a modern browser like IE that is fast, fluid and perfect for touch.”