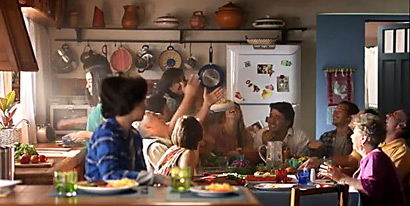 Having scored a hit with the Hispanic campaign it launched last year, dubbed “Sabemos que te va a encantar” (“We know you’re going to love it”), Kraft Macaroni & Cheese has launched a new round of TV spots and other creative focused on driving home the same core message, in humorous fashion: Eating this American favorite doesn’t make Latinos any less Latino.

After Kraft recognized that the Mac & Cheese brand, while growing as a whole, was under-indexing among Hispanics, consumer research revealed that Hispanic families’ concerns about preserving their cultural heritage while adapting to various aspects of U.S. lifestyles was an underlying reason, the brand’s marketing director, Noelle O’Mara, tells Marketing Daily. “Food is, of course, viewed by Hispanics as one way to hold onto their heritage,” she notes.

In two of those spots (each 15 seconds), kids conducted experiments to see if feeding the Mac & Cheese to an older relative would make that person act “more American” or “less Latino.” In one, the result is that a kid’s dad (who believes that eating the dish “makes us less Latino”) takes a bite, then simply continues what he was doing: Dancing feverishly to salsa music in the family’s home. In another, an uncle who is struggling over a book of English aphorisms continues to struggle with the significance of “a bird in the hand is worth two in the bush” after his nephew feeds him the Mac & Cheese. In both cases, the kid pronounces that there’s no change, as a graphic pops up, stating “Mantente 100% Latino” (“Stay 100% Latino”).

In the third, 30-second, original spot, a kid and his mother are shown each trying to please the other -- she by adopting American cultural gestures like “high fives” and serving him Mac & Cheese; he by watching Hispanic programming and always asking for Latin food along with his Mac & Cheese.

The campaign won the brand an Effie Award in the Hispanic category -- along with driving a substantial sales lift, according to Kraft.

The new round of three Spanish-language spots includes one (“Realizacion”) in which a kid wryly observes -- as his large family, shown in the background, engages in passionate discussion while enjoying a meal -- that while his mother thinks that serving the family Kraft Mac & Cheese “makes us less Latino,” clearly, “nothing could make us less Latino.”

In a second ad (“Compra Secreta”), a kid confides that his mom loves the Mac & Cheese, but doesn’t want her friends to think she’s becoming less Latino, so she sends dad out to buy it “in the middle of the night, as far away as possible, using my sister’s car, during a thunderstorm, while in disguise.” The disguise: a bad women’s wig and earrings, worn with a men’s trenchcoat.

In a third ad (“Amor Prohibido”), a kid confesses that his girlfriend thinks he loves her passionately, when in truth what he really loves is that she always has Kraft Mac & Cheese at her house. “Is it wrong? This forbidden love?,” he asks. “It tastes pretty right to me.”

(While all of the ads are being aired on TV in Spanish without English subtitles, for non-Spanish-speaking Marketing Daily readers’ reference, Kraft provided links to versions with English subtitles viewable on YouTube -- Realizacion; Compra Secreta; Amor Prohibido -- as well as the links to the non-subtitled versions provided above.)

In all three ads, the “Stay 100% Latino” messaging and the campaign tagline again appear at the end.

Whereas the thrust of the general-market campaign is to convey humorously to adults who were brought up on Kraft Mac & Cheese that it’s okay as grown-ups to keep enjoying this dish that they’ve always loved, first-generation, foreign-born Hispanics most likely grew up without that emotional connection to or affinity with the brand, Chasnow notes.

Changing the verb tense in the otherwise identical tagline -- and using the creative approach of featuring “straight-talking kids” in both the Hispanic and general-market campaigns -- enabled the brand to maintain always-crucial brand consistency across the campaigns, while conveying messages that are very much tailored to the respective audiences, he points out.

The campaign also includes targeted radio ads, and in-store point-of-purchase promotions and sampling opportunities. Social media aren’t part of the current Hispanic campaign, but will be key in upcoming efforts, according to O’Mara.